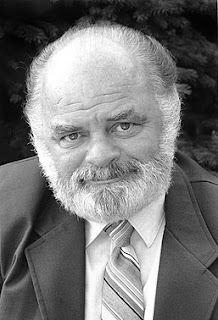 It may be that only those of you in New England and northern New York state will recognize this man. Robert J. Lurtsema had a classical music program on WGBH, the Boston public radio station, called Morning Pro Musica. He was the morning voice in our home for many, many years. We would set the alarm to wake up to the birds which always opened his program, I believe at 7 am. How things have changed. Now the public radio stations I listen to have talk, talk, talk all morning, and mostly all day as well. Politics, opinions, dire news coming into our homes. But not in those days. We didn't know how lucky we were, how truly blessed we were to have that lovely, calm, quiet voice in our radio lives. I learned more about classical music than I ever could have in college, along with all the correct pronunciations. Each day of the week, after the birds, he opened the show with a different piece. My favorite was Respighi's Ancient Dances and Airs, which I think was the Thursday music. In his obituary, Mark Feeney of the Boston Globe wrote:

He tended to program the early hours chronologically, with music of the medieval, Baroque, and Classical eras predominating ( "Nothing too jarring before 9 a.m.," he liked to say)

Also from the obituary:

Hearing the news read in Mr. Lurtsema's magisterial tones - The New York Times once described his voice as having ''the texture of warm fudge'' - was a unique experience. Indeed, a listener once wrote him, ''If the end of the world were coming, I'd want to hear it from you. I can hear you saying, `Well, there has been an announcement that the world will end in 28 minutes. That gives us just enough time to hear Telemann's Sonata in F for Recorder, Oboe and Continuo.'

He was also a big influence in our lives in terms of Scottish music. He was the host for Burns' Night, a celebration of the great poet's birthday in January. One year, Tom and I drove down to Boston through the snow in our big red four-wheel drive truck to be there. We saw the wonderful Jean Redpath and the Vermont Scottish weaver and singer, Norman Kennedy.

He would have been 76 today. I am thankful he was a part of my listening life, and oh, how I miss him.
Posted by Nan