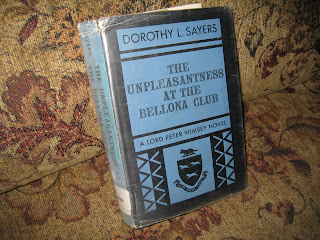 The Unpleasantness At The Bellona Club
Dorothy L. Sayers
1928


As November 11 approached, I found myself thinking of a murder which happened on that very day. Not in real life, but in the Dorothy L. Sayers' Peter Wimsey mystery called The Unpleasantness At The Bellona Club. The "unpleasantness" refers to death in that wonderfully understated British way.

The gist of this story is that a very old man is found dead at the Bellona Club. It is not surprising at his age, but details begin to surface about his estranged sister's death on the same day. It must be found out which one died first because of a will. Did they both die on the 11th? And was there foul play?

The book is not only a mystery, but also is about the young men who happened not to be killed in World War One. It was interesting to read their take on the activities on the 11th, ten years after the war had ended.

All this remembrance-day [not capitalized in that time, I guess] business gets on your nerves, don't it? It's my belief most of us would be only too happy to chuck these community hysterics if the beastly newspapers didn't run it for all it's worth.

What's the damn good of it, Wimsey? A man goes and fights for his country, gets his inside gassed out, and loses his job, and all they give him is the privilege of marching past the Cenotaph once a year and paying four shillings in the pound income-tax.

And this description of a veteran:

George had been very nervy and jumpy, and had started "muttering" again. These had been a form of shell-shock, and they had generally ended in his going off and wandering about in a distraught manner for several days, sometimes with partial and occasionally with complete temporary loss of memory.

Dorothy Leigh Sayers is a very clear writer. So often a mystery has tons of characters, and I am always going back to see just who someone is. Not in her books. The reader remembers who everyone is, and what is going on, and Sayers even has Lord Peter occasionally reminding us by talking over the situation with someone. The book is, in fact, mostly conversation, with little description.

There were a couple parts that really reminded me that this was 1928, not 2007. There is mention of a "telephone-cabinet" so that people could have private conversations. Remember those? Now, people are talking on their cell phones everywhere and don't seem to care a whit that the rest of us hear every word (and wish we didn't have to). And get this! In the morning a doctor is having a whisky and soda. Can you imagine there being liquor on your doctor's breath?!

And I must share what Lord Peter says about reading:

Don't know what I should do without books. Fact, I always wonder what people did in the old days. Just think of it. All sorts of bother goin' on - matrimonial rows and love-affairs - prodigal sons and servants and worries - and no books to turn to. I have to fall back on books for my escape.

I have read most of the Wimsey books, but this was the first time I've read The Unpleasantness at the Bellona Club, though I have seen the television production with the absolutely perfect Ian Carmichael in the role of Lord Peter. It was fun reading the book during the appropriate time period. The story flows, the characters are well-drawn and interesting, and the mystery is just right. I lived happily in one of my favorite time periods, with my favorite detective until the end of the book. A lovely reading experience.
Posted by Nan