Book Report/The Battle For The Castle, 1992 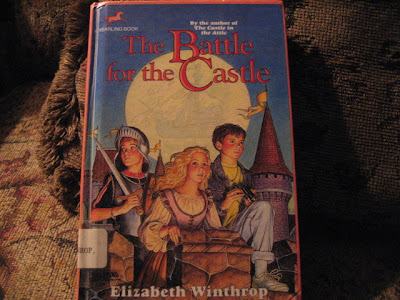 There's always trouble when fictional characters let someone else in on a special secret. In the first book, The Castle in the Attic, William kept his own counsel; he didn't tell his best friend Jason about the castle or his "magic powers." Well, in this book, published seven years later, and taking place two years later, he spills the beans. There is a rite of passage where these young boys live that they all "must" jump the trains (jump on, crawl across the top, and jump off on the other side) when they are twelve years old. William, still small for his age, does not succeed. I think his telling Jason about the castle is his way of making himself look good in his friend's eyes after blowing his attempt. And Jason wreaks havoc just as Omri's friend, Patrick does in the Indian in the Cupboard books. He is a loose cannon whom William cannot fully trust as they make themselves small, and proceed on a new adventure. Once they arrive, things get better and they must band together to save the kingdom from a new peril.

The very idea of twelve year old boys jumping a train will shake up any readers who are parents of young ones. In the television interview I saw, the author of the book, Elizabeth Winthrop addressed this:

The biggest thing about children's books is that you cannot talk down to children. You cannot preach to them in any way. I have to get down on that child level. I have to leave the adult behind. There are times when your characters do things that you just say, "no, don't do this" - I mean in Battle For The Castle, William jumps a moving train and every single part of me is screaming, "don't do this, William," but that is what he would do.

I'm not a fan of rats. They probably top my list of things I'm afraid of. And so, this book was a little bit hard for me to take. Picture giant ones, standing on their back legs, progressing along "like a great black oil spill." Yuck!

The Battle For The Castle will be very appealing to those approaching the teen years, or just entering them. There is a subtle sense in the book that the older generation will not face the facts, and it is up to the young to take things into their own hands. In order to succeed this time, William must depend on his wits, not his ability in gymnastics. We meet a wonderful girl character, who is descended from one who could tell the future and knew all about herbs. These two gifts, combined with the talents of Jason and of William, save the day. Kids (and adults) love a series, even if it is only a series of two, so I'm sure this book made a lot of readers happy to see William again. And he came of age in a truer, better way than that of jumping trains.
Posted by Nan