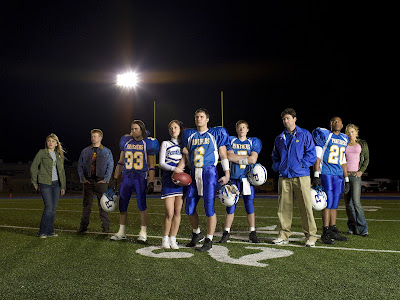 Clear eyes. Full hearts. Can't lose. These are the words the Dillon Panthers high school football team, in the television program, Friday Night Lights, say all together before every game. Great words, don't you think? And in the locker room there is a sign which reads, Football- Training for the rest of your life. This is the highest goal; this is sports at its highest level. Playing sports doesn't always work out that way, but this is the ideal. Learning how to work with others, learning you are not alone whether you are the star or the one who drops the ball, learning to play fair, learning to lose and win with grace and poise. These are good lessons. They are life lessons. These are things that can get us through every single day.

I'm not from Texas but I have cousins there. When we were all little, they came up to visit every summer. I remember late night conversations with Patty about Texas Friday night football games. The notion of games played under lights seemed such a romantic idea to me. Where I grew up, we had Saturday afternoon football games. They were wonderful enough, but oh, nighttime games seemed so grownup to me. In Texas, even in her very small town, they take their football, and their cheerleading, very, very seriously. My uncle went to the local high school football games, both home and away, long after his kids had grown, until he died.

In my teen years, football was important. The games were played just once a week, so we had all week every fall to prepare for that day. Everyone showed up. Friends, girlfriends, parents of players, other parents. It was the weekend event. And then there were the Friday night pep rallies. The whole Main Street was closed off, and we marched behind the band and the cheerleaders. On the night before the last game of the season, we'd walk up to the park on the hill where we'd have a big bonfire, and afterwards there would be a dance at the school. These sound like such simple pleasures now. Kids have so much more going on. But then, and even now in many areas of the country, this still goes on.

Friday Night Lights is a television show without stereotypes. Let's see, there is the "ideal" high school couple; he's the star quarterback, she's the beautiful cheerleader. There's a stereotype, right? Well, no. In the first episode this boy is hurt playing football, and in an instant, he becomes paralyzed and in a wheelchair, possibly forever. And that beautiful girl, well, her perfect life falls apart when her father has an affair and destroys the family life she has always known. Then there's the sweet boy who is launched into the quarterback role. In a more by-the-book television show, he would become a great athlete overnight, win the girl, etc. Well, it is hard, hard work for him to learn this position. And he must do it while taking care of his grandmother who seems to be at the beginning stages of Alzheimer's. His mother is long gone, and his father is a lifetime soldier in Iraq. Oh, and he also has a job. It goes on and on. The characters in Friday Night Lights are real. We know them. There are wonderful families and very broken families. There are high school alcoholics and there is racism, and there is generosity and real decency. All just like real life. It isn't afraid to show the down side of so much town support, with grown men being more interested in these games than just about anything else in life. Indeed to many of them, these games are life.

I first heard of Friday Night Lights from reading a blog entry a few weeks ago, and I am so grateful. After watching the first episode of the second season, we started taping it each week, and renting the dvds of season 1. And this will demonstrate how much we really love this show - Tom is already dreading the end of the first season dvds because then we can watch it just once a week. These people are in our minds and in our hearts. We both agree we have never seen anything to beat it (and this from two huge LOST fans).
Posted by Nan