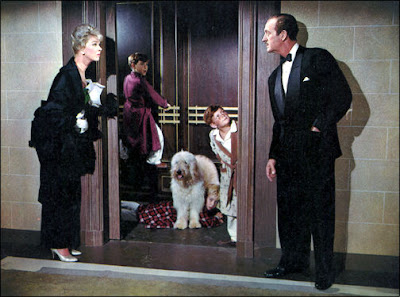 A picture from one of my favorite Doris Day movies, Please Don't Eat the Daisies.

If you love Doris Day, the singer and actress, you have a real treat in store. From the Doris Day site:

New York - A new, one-hour interview with legendary singer and actress Doris Day is slated to air on Sirius Satellite Radio and WNYC on Sunday October 31 at 1:30 p.m. ET.

Jonathan Schwartz, host of "High Standards" on Sirius Satellite Radio's Siriusly Sinatra channel 73 and his own show on WNYC, announced the interview he recently conducted with Ms. Day will be simulcast near the mid-point of his weekly four-hour Sunday show, 12-4pm ET.

Schwartz, a long-time New York radio presence, former artistic director of Lincoln Center's American Songbook and diehard jazz fan, was thrilled when Ms. Day agreed to speak with him Sept. 23 about her life, her singing career, and her work with Frank Sinatra. Ms. Day taped the interview via phone patch from her Carmel Valley, Calif., home. The interview, which was originally planned to be 30 minutes or less, stretched beyond the one-hour mark as Doris told one great story after the next.

"It was great fun to recall all those memories," Day said after the interview had ended. "I'm always so happy to tell stories to my fans and friends. I hope they enjoy it, too!"

Fans outside of WNYC's broadcast area can catch the interview on Saturday Oct. 30 and Sunday Oct. 31 at 1:30pm ET online by visiting the WNYC website and clicking the "Listen Now" button on the right side of the page.

It is channel 75 on Sirius, and 73 on XM. I have Sirius XM in my Beetle, and I plan to spend that hour or so driving around in utter listening bliss!
Posted by Nan