As always it is a great pleasure for me to visit with Mma Ramotswe and everyone else in her circle. I love each of these books.

In this installment, Mma Ramotswe has received a letter from an American lawyer requesting her help in finding someone. His client has died and left a gift of $3000 to a safari camp guide because of his particular kindness when she visited Botswana. The problem is that she did not remember what the camp was called, only that it had the name of an animal or bird, or the guide's name, and so it is now up to Mma Ramotswe to find him. She and her assistant, Mma Makutsi go off to a delta region of the country where they must travel by boat to the camp. On the river there is always a danger of hippos and crocodiles. The former can upset the small vessel, and the latter has been known to seize somebody right out of a boat. Happily neither horror happens, and they proceed safely to solve the case.

In addition to the problem in the case, Grace Makutsi has more personal trouble. Her fiancé has lost part of his leg in an accident. Phuti Radiphuti (silent h) - one of my favorite names in fiction - has an aunt who takes exclusive care of him after his operation and doesn't even want Mma Makutsi to visit. She isn't the most self-assured of people and it is very difficult for her to know what to do.

I know that some people really didn't like the televised version of The No. 1 Ladies' Detective Agency, and I agree that it wasn't as true to the writing as I may have wished. However, I do think the casting was utterly perfect. Now when I read the books I see the characters as the actors who played them. I am particularly fond of Anika Noni Rose who played Mma Makutsi. She brought the character to life in a way I just couldn't see on the page. Because of the actor, I have become even more fond of the character, which I find amazing. 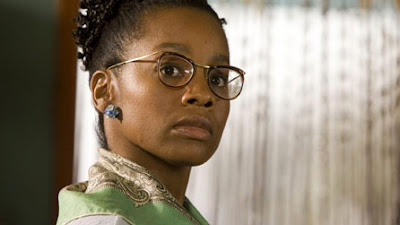 As in all the books, there is much wisdom and thought, both deep and mundane.

He knew that Mma Mateleke had a tendency to talk at great length; indeed, he could always tell when Mma Ramotswe had been to see her friend because she inevitably came back not only exhausted but also disinclined to say very much.
"Mma Mateleke has done all my talking for me today," she once said. "I cannot say anything more until tomorrow. Or maybe the day after that. It has all been said."

No one is referred to as 'dead' in this series.

She used the expression that the Batswana preferred: to become late. There was human sympathy here; to be dead is to be nothing, to be finished. The expression is far too final, too disruptive of the bonds that bind us to one another, bonds that survive the demise of one person. A late father is still your father, even though he is not there; a dead father sounds as if he has nothing further to do - he is finished.

I have read some of these books in the print version, I have listened to some on unabridged audio, and now I have read one on my Kindle. It doesn't matter how I read them. The minute I begin, I am back in Botswana, the land all the characters love so well. The outside world disappears and I can see the landscape and feel the air. The word 'gentle' is sometimes overused, but it is the best adjective to describe these books. There is also a generosity of spirit, even when not every character is a good person.

Having the right approach to life was a great gift in this life. Her father, the late Obed Ramotswe, had always had the right approach to life - she was sure of that. And for a moment, as she sat there with her friend, with the late-afternoon sun slanting in through the window, she thought about how she owed her father so much. He had taught her almost everything she knew about how to lead a good life, and the lessons she had learned from him were as fresh today as they had ever been. Do not complain about your life. Do not blame others for things that you have brought upon yourself. Be content with who you are, and do whatever you can do to bring to others such contentment, and joy, and understanding that you have managed to find yourself.

Alexander McCall Smith's words are guideposts on our paths through life.
Posted by Nan