The Marriage Bureau for Rich People by Farahad Zama


First of all, isn't that a great title for a book? And the book itself is just as wonderful. I really loved it. The story takes place in Vizag, India. As happens with many a retired person, Mr. Ali is bored, and is driving his wife crazy.

I have been running the house for more than forty years, and the last few years since you retired have been the worst. You keep interfering with my routine.

Mr. Ali puts an ad in the paper which says,

He opens a matchmaking service whose office is on the porch of his home. You may remember that Vish Puri in the Tarquin Hall books is often hired to do background checks on prospective marriage partners because the couple has not gone the traditional route as they do in this book. Mr. Ali will make certain that the parents of marriageable children find the partner most suitable, in caste and in religion, and even in diet and astrological compatibility if desired. The business starts slowly but grows so much that now Mrs. Ali is going crazy for another reason. The phone is always engaged with customers, she must answer the door when her husband isn't in, and he isn't doing any of the work around the house he should be doing. In a short time, they get a business phone and an assistant. The young woman, Aruna becomes an important part of the agency. As we learn the stories of the clients, we also learn about the country, its customs, the different religions and castes, the gardens, and as in the Tarquin Hall books, the food!

This is the first in a series, and I have ordered the second. I love these characters, the locale, and the stories. I am endlessly fascinated by and enchanted with India. So many of us cannot imagine such a thing as an arranged marriage, but reading this book gave me a whole new perspective on the idea. It does work and when you read it you will see the many reasons why.The author himself has an arranged marriage which you may read about here. 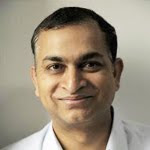 Introduced by comedienne Jo Brand at the Café de Paris in London, Farahad Zama was awarded with the prize and a cheque for £5,000.

One of the judges, Sophie Kinsella, said of the book “The Marriage Bureau for Rich People is a lilting, funny, warm-hearted book set in the world of Indian arranged marriages and match-makers. It deals with both romance and pragmatism in a witty, beguiling way and charmed the judges with its quirky humour, romantic heart and unforgettable characters.”

Farahad Zama lives in South London and writes on his daily commute to work in the City. He said on the evening “I am absolutely delighted at winning the Melissa Nathan award. When I started writing, it was as a diversion from a stressful job and getting awards was the last thing on my mind, especially from a jury of such well-known authors, comedians and literary figures.”

Farahad Zama grew up in Vizag on the east coast of India, where his novel is set. His parents paid 20p per month for him to attend an English school and from there he went on to university where he was recruited by Citibank. He has since worked in Mumbai, Zurich and New York, before moving to London in 1990. He is a director in the FX technology division of Merrill Lynch. Like many of the characters in his novel, Farahad had an arranged marriage to a local girl from Vizag; they have been married for many years and have two sons.

I've not heard of the literary category, 'Comedy Romance,' before. It is the perfect description. The Marriage Bureau for Rich People was an enjoyable reading experience which still makes me smile when I think about it. This is a book I'd like to read again for the richness of the culture and the pleasure of the characters' company.
Posted by Nan