This is another cake recipe from my mother's old collection. The first one I shared was a sponge cake. I don't know who wrote out the original recipe. Perhaps this was my mother's 16-year-old handwriting, maybe it was my grammy's, or maybe it was Emily Cooper Norris herself who wrote it and gave it to my grandmother. I never met her. I presume she lived on a neighboring farm. My mother added 'vanilla,' and I added how much vanilla and the comment at the top. 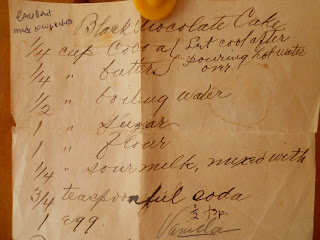 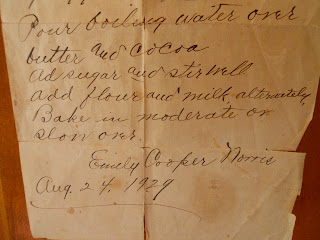 My notes:
To make the sour milk, I put lemon juice or white vinegar in the bottom of the measuring cup and fill it to 1/4 with regular milk.
I add 1/2 teaspoon vanilla.
I mix it all in the KitchenAid mixer.
Bake in preheated 350º F. oven about 30 minutes.
This makes a one-layer cake or 10 cupcakes. 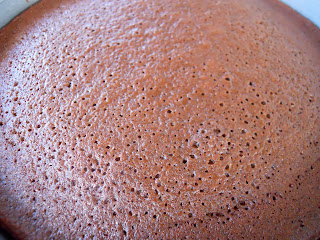 Such a simple, yet delicious cake to make, and just the right size if you aren't baking for a big crowd. When it cools, I'll frost it with a buttercream frosting: confectioners' sugar, butter, vanilla, milk. This is the twelfth and last installment of Matt's birthday present. I can't believe almost a year has gone by. It has been such a hit, I may do the same next year.
Posted by Nan