62. The Dark Vineyard : A mystery of the French countryside - second in the Bruno, Chief of Police series
by Martin Walker
mystery, 2009
Kindle book - 9
finished, 10/1/10

I expect that many of us in the US 'know' the French countryside through the pages of Peter Mayle's books about Provence. I was delighted to read that he is still there, happily living the good life.

Now we have another area to explore - the Dordogne region in the new mystery series by Martin Walker.

From the opening words of Bruno, Chief of Police, I was captured:

The town emerged from the lush green of the trees and meadows like a tumbled heap of treasure; the golden stone of the buildings, the ruby red tiles of the rooftops and the silver curve of the river running through it. The houses clustered down the slope and around the main square...

Though Saint-Denis is a fictional town, it probably looks much like Hautefort. 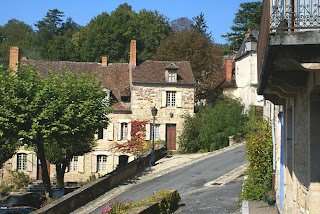 In Roberta Rood's excellent review of The Dark Vineyard, she says that Bruno reminds her of Hamish Macbeth, the Scottish policeman in M.C. Beaton's series, and I agree. I found myself thinking about Hamish often. These men are both completely contented in their small villages. They don't long to be promoted because it would mean having to move away. They love the routines of their daily lives, and they love the people in their communities. When Benoit Courreges, known as Bruno, first came to be the town's policeman ten years ago, he was given an old tumbledown shepherd's cottage on four hectares (about ten acres) of land. Over time he has made it into a country haven. He grows food and keeps chickens, and has a basset hound, Gigi.

As those of us who read mysteries know so well, in the most beautiful, placid surroundings crime often abounds. In the first book, there is a brutal murder of an elderly war hero, and in the second there is arson and murder. The troubled past invades the peaceful present, both in the village and in Bruno's own memory of his time as a peacekeeper in Bosnia.

So we have an idyllic setting, beautifully described and we have crimes with fascinating details. We have stories of historical interest. What more could we ask for? Oh, yes. Food. The food is very important in the books. People are always eating good food and drinking good wine.

I loved spending my reading time here, and I hope there will be more and more books in this excellent series. Please visit the delightful Bruno, Chief of Police site to learn more about the books and the area.