The Stabbing in the Stables by Simon Brett 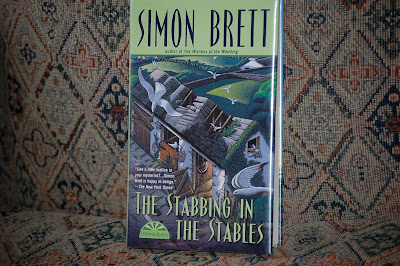 14. The Stabbing in the Stables - seventh in the Fethering series
by Simon Brett
mystery, 2006
library book
finished, 3/12/10

This is a series in which the characters do grow and change as the books go on. When we first met Carole and Jude they were pretty much stereotypes: Carole - the well-controlled, tidy, retired civil servant, and Jude - the free-spirit, alternative therapist, with an unknown past. By this, the seventh in the series, they have moved out of their rigid roles, and each of them bends a bit in understanding the other. They are neighbors in the south coast town of Fethering, England. They have become quite close friends and partners in solving crimes of murder.

The murder in this book is of a man who used to be quite a famous horseback rider until a fall from a horse stopped his career. For the past several years, he and his wife have run a boarding facility for horses. They don't have much money and their place is falling down around them. They have to put up with fussy, demanding, sometimes aggressive clients to pay the bills. When Jude finds his body, we discover that there are many secrets in this 'horsey' world. The mystery was quite satisfying, and I did enjoy spending time with these two women again.

Now, a caveat. There is a subplot involving cruelty to horses. I'm the first one to run a mile when I see such a thing in books, but it was mentioned maybe five or six times, and I moved my eyes right along so I didn't read the details. It does connect in the end to the murder.

I think a lot of people who don't read cozy mysteries think that they are quite mild and even humorous. Well, that can be true. But they can also offer sordid facts about individual characters. After all, murder is not pretty even in a cozy. There is a particularly awful man in this book whose actions are appalling.

Each book in the series spotlights a different facet of life, such as modern pubs in England or the New Age movement. This one focuses on the seedier aspects of the rural rich and horses. I did enjoy it. I stayed up till 2 am last night to finish, though there is the abuse factor which made it more difficult for me.
Posted by Nan