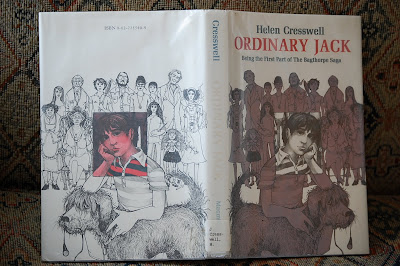 The back and front cover illustrations were done by the late, wonderful Trina Schart Hyman. When my children were little, our house was filled with her books. You may see a few more examples here.

I first came upon the Bagthorpe Saga when I was a library volunteer shelving books, and I really enjoyed them. I found myself thinking about them lately and decided it was time to read the first in the series again and see if I still felt so fondly toward this eccentric English family. I wasn't disappointed. Ordinary Jack is one of the few books which made this reader feel like a child again, curled up on a window seat or in a big chair. I loved it. I loved the story, the characters, the setting.

Each of the Bagthorpe children is gifted and in not just one way. They all have second or third or even fourth 'Strings to their Bows.' But not eleven year old Jack. He isn't special in any visible way. He isn't sporty. He isn't a genius. Even his dog is called Zero, so-named by Mr. Bagthorpe:

If there was anything less than nothing, that hound would be it. But there isn't, so we'll have to settle for Zero.

And to illustrate the 'Bows' of his siblings:

The family computers, William and Rosie, had pointed out that mathematically speaking there was a whole lot to choose from that was less than zero, but Mr. Bagthorpe dismissed this as idle speculation.

Jack's Uncle Parker, who is married to Celia (a potter, a poet, and a crossword whiz) decides to do something about Jack's lack of distinction in the family. His ideas and their executions are outrageously funny.

This is not an 'ordinary' family in any way, and not just because of the various talents. From the grandfather who is S.D. - selectively deaf - to Jack's four year old cousin who has a penchant for starting fires to his grandmother who is obsessed with her dead cat, the characters keep the reader interested and entertained. Helen Cresswell's writing is intelligent, humorous, and so appealing. She was a very prolific author, and you may read a list of her books here. I've asked the library to get me the next one in the series, Absolute Zero, because I want to spend more time with this family.
Posted by Nan