Death of a Witch by M.C. Beaton 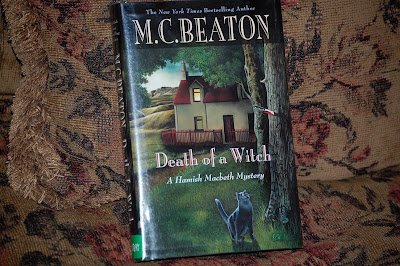 
In this book, all the local men are visiting the 'witch' ostensibly for indigestion problems. She concocts herbal remedies for them. But it turns out what they are really receiving is something to make them more 'attractive' to their wives. They end up getting sick from her cures. And then she is found murdered and her house is burned down. We learn she has left a trail of people who hate her. Hamish hopes against hope that the killer will not be one of the locals. He loves his village and his villagers even if they are flawed as human beings. He accepts them for who they are. Rare quality in a rare man.

Death of a Witch includes some disturbing events which made me cringe a bit but there is always humor in these books to help lighten the troubles. The epilogue is particularly zany as Hamish goes on a holiday won by his mother.

The weather and the landscape are, as they say, characters themselves in this series.

A small sun was shining through a thin veil of mist when Hamish returned to Lochdubh, creating that odd white light so typical in the north of Scotland.

In the Highlands of Scotland it's possible to get three climates in one day.

Oban was a pretty place in summer but as he drove down to the waterfront, a gale was whipping across the harbour.

The thaw came quickly the following day, only to be followed by a sharp frost turning the roads treacherous.

Granger had fallen into a peat bog. "I'm sinking."

This is the village of Plockton which was 'Lochdubh' in the television series of Hamish Macbeth. No wonder the policeman is so content to be there despite the occasional unpleasantness of murder! 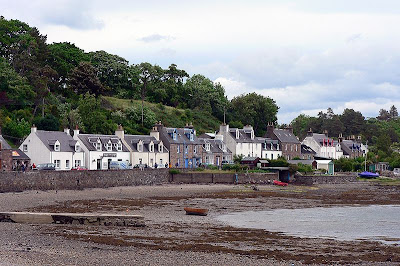