Death of a Gentle Lady by M.C. Beaton 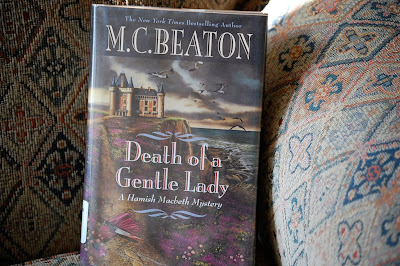 
Well, the lady is definitely not gentle.The word just happens to be her last name, the name of the man who married her when she was a hatcheck girl. Everyone in the area of Hamish Macbeth's little town of Lochdubh thinks she is a wonderful little old lady; everyone, that is, except Hamish. He doesn't like her. And of course the reader very soon agrees with him. She is cruel to her children and cruel to her servants. And also, of course, she is soon dead. She is not the only corpse. The second one is a woman from Turkey whom Hamish had planned to marry to save her from being sent home, and to save his police station from closing. Lucky for Hamish she dies before the wedding since it turns out she was lying to him; she was really a high class 'lady of the night' from Russia.

And there you have the basics of this mystery. We reconnect with some old friends: Elspeth, the journalist and Priscilla, the former love of Hamish's life. The delightful little Currie twin who always says a phrase twice makes an appearance, makes an appearance. :<)

There are many times in the story when Hamish notes how much he loves this village. The small town policeman who is truly content to be where he is. No matter how light and fluffy the mysteries are, I'm so fond of Hamish that I just don't care. He is a wonderful character. His home, which is in the police station, feels so cozy and comfortable and welcoming with his dog and his cat.

It isn't absolutely essential you read these books in order. I know I've missed a couple, but the author catches us up pretty easily. After all, not much changes in Hamish's life other than the murder victim, and that's just the way he likes it. And me too.
Posted by Nan