The Fortnight in September by R.C. Sherriff 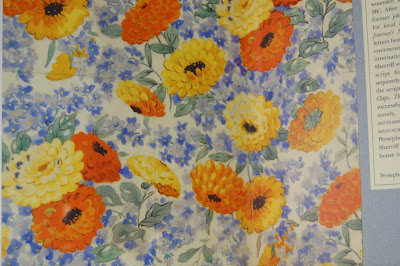 The endpapers:
from 'Dahlias' a 1931 design for a dress silk by Madeleine Lawrence
©MoDA

I am not a 'good old days' sort of person and I'm not awfully nostalgic; but as I turned the pages of The Fortnight in September I saw that truly something special has been lost forever. Mr. Stevens gets two weeks vacation a year, and every year he and his family have gone to the same place, the sea at Bogner, where Mr. and Mrs. Stevens went on their wedding trip. The whole book is an almost minute by minute travelogue of this annual September vacation.

Nowadays we are, as a rule, much more of a traveled, worldly society. When families go to Africa or Switzerland or Costa Rica, how could they possibly be satisfied with a two week trip to Bogner? Are we spoiled? Perhaps. We expect lovely hotel rooms with cushy robes and down pillows. Teenagers go off alone on an exchange program to some faraway land. College students spend a semester or a year in another country. This would have been unimaginable to the Stevens family. And yet, reading this book I felt that they looked forward to and enjoyed those two weeks a year in a way that none of us can possibly conceive of. I'm not saying one way or another is better; just that these older vacations and the newer vacations are as different as travel by horse and by car. As Joni Mitchell wrote, 'there's something lost, but something gained, in living every day.'

The Fortnight in September captures not only a place and time, but a society that shall never come again. 'How ya gonna keep 'em down on the farm, after they've seen Paree?' Exactly. Yet this way of life was common to the early 1930s, and even later. My childhood vacations were to the seashore a couple hours away. I went to Canada but only because my father came from there, and we visited relatives. I went to Washington, D.C. with a friend's family one week in April; and to California when my father was a delegate to the Democratic convention in 1960. Occasionally my parents went further afield when my father won trips through selling cars in his Pontiac dealership, though I didn't go. But that's it. No Europe, no Asia, not even out west in my own country. People tended to stay closer to home. I don't recall ever longing to go far away.

It was only when I was in college that I began to go on big trips. Two months in England and Europe, and later another month in England when we got married. We brought our kids over there for a month. We went to visit relatives in Texas and Arkansas and Florida; we visited friends in San Francisco; we spent some summer weeks on Prince Edward Island, Canada. And we did have wonderful times; times that are remembered fondly and spoken of often. But oh, how different from the Stevens family. Not only do they go to the same place, they also stay in the same lodgings, a place called 'Seaview,' which has gotten shabbier as the proprietors age (and one dies).

When I finished the book, I told Tom it had become one of my top favorite books of all time. I loved it beyond words. It is a social document, it is a character study, it is descriptive, it is honest, and it is really perfect. Yes, I do mean it.

The author shows us how delightful Mr. Stevens is with his planning and his almost childlike excitement, but he doesn't fail to note that Mrs. Stevens is not thrilled with the vacation, and has never been except for the very first trip on her honeymoon.

...the coming of the children had made the fortnight a burden - sometimes a nightmare. At home the children were hers: they loved her: came to her in everything. At Bognor, somehow they drew away from her - became different. If she paddled [in the water] they laughed at her: saying she looked so funny. They never laughed at her at home.

The children are now twenty, seventeen, and ten. The older two both have jobs, yet still live at home. There has been a smidgen of concern on the parents' part that they might go off without the family this year, but that doesn't happen. And this year Mrs. Stevens looks toward the trip a bit more favorably because those 'children' have more separate lives at home, and she hopes the trip will 'bind' the family together.

I love the way Mr. Stevens looks at the special days in a year.

... he had the gift of establishing domestic "Occasions," which do so much to strengthen the links of a home.

Something almost in the nature of a ritual surrounded these special days: a ritual that bound the family together in thought and deed.

Christmas Eve: Whit Monday: August Bank Holiday and family birthdays were painted with letters of carefree, flamboyant scarlet. New Year's Eve, and Going Away Eve had titles of a more delicate, meditative red: the former because of its wistful plea to strengthen fading hopes, the latter because it heralded the yearly release of emotions which Mr. Stevens neither wished nor sought to analyse and understand.

In about 300 pages, the Stevens family gets ready to go, travels to Bognor, enjoys its sights and sounds and smells. The book ends when they depart for home. The reader spends the fortnight with them, experiencing every smallest event right alongside them. Nothing hugely dramatic happens, but there are interior changes that the family members feel and the author takes note of. The characters take time to think about their lives at home. Whether we travel near or far on our vacations, the main thing they offer is a break in routine, and a kind of re-creation of ourselves. This is what makes the book just as current today as it was almost eighty years ago.

But on holiday it is the reversing of normal habits that does one so much good.

Dick and Mary had thrown aside their hats and got their canvas shoes on, while Ernie, after some opposition from his mother, had peeled off his stockings, and now sat on the steps, bare legged and bright eyed.

He felt radiantly happy: as young and as light as a schoolboy.

There was nothing, at home in Corunna Road, to compare with this delicious hour of idleness. In the evenings at home there was the washing up to do - the breakfast to set, and all those unexpected little things that conspire in a home to keep you on your feet.

The reader in 2009 is all too aware of what is coming on the world scene in 1931. This dear family doesn't know that in a very few years both their sons will most likely be in the war. The family vacation will never be the same, and most likely will never happen again. There will be war work and air raids and sorrow and loss. But the Stevens family does not know this, which gives the book a different poignancy and meaning.

This book is another gem from Persephone Books, and my favorite so far. 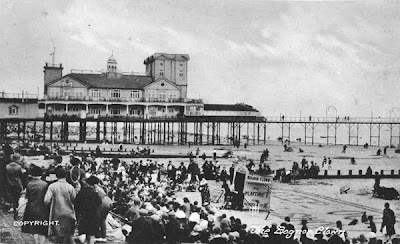