Cheerful Weather for the Wedding by Julia Strachey 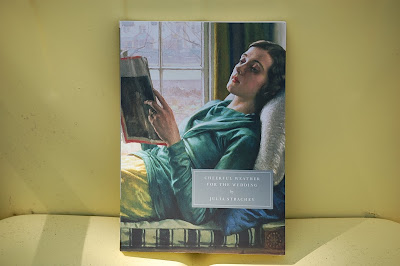 
When I first began Cheerful Weather for the Wedding, I read it slowly, absorbing the very descriptive prose.

The mirror was rusted over with tiny specks by the hundred, and also the quicksilver at the back had become blackened in the course of ages, so that the drawing-room, as reflected in its corpse-like face, seemed forever swimming in an eerie, dead-looking, metallic twilight, such as is never experienced in the actual world outside.


Sunlight fell in dazzling oblongs through the windows upon the faded wistaria on the cretonne sofas and arm chairs, and lit up the brass Indian tray on trestle legs piled up with magazines and library books. The yellow brilliance was reflected back from the white-and-brown Serbian embroidery hanging on the end of the piano, and from the silver photograph frames, and Moorish paper-knives.

I didn't enjoy myself so much while within the pages, but now that I've been away from it for a few days, and as I sat down to write, I began to think more highly of the book. It deals most aptly with the stresses and strains of a wedding day. These are particularly acute when some of the extended family members are actually staying at the bride's home. We all bring our own thoughts and memories and emotions to a wedding, as we do to a funeral. In a few words, Julia Strachey conveys much about each character.

The younger sister of the bride who says about herself:

You must think me a kind of great clumsy block-headed rhinoceros in my bridesmaid's frock, I know!

The mother of the bride is ridiculed behind her back by a friend of her daughter's. That same mother makes mistakes and blames others for them. Two younger cousins bicker about socks. An old suitor is miserable. The bride herself is dulling her feelings with rum; and why not? She has been engaged only a month, and is going to embark to South America with her older husband, leaving this home and her family. She says to her old friend:

You will faithfully promise to come out and stay with us; won't you?... I could not possibly exist there for long without you.

I've read Cheerful Weather for the Wedding described as a black comedy, and I suppose that's so, but it is also a pretty darn accurate portrayal of a wedding day. Maybe not every wedding day, but certainly many. We are often not at our best when emotions run so high. Our worst traits easily come to the surface. I think perhaps what I thought of as lack of enjoyment was really discomfort - the same feeling I would have had if I'd been amongst these people. That's high acclaim for a writer if she can make the reader feel like she is there, inside the book; not participating but certainly picking up the atmosphere.

Tom and I have never for a moment regretted not having a big wedding. We went to England. We lived in a London hotel for fifteen days to satisfy a residency requirement, and went to a registry office in South Kensington, where, in a lovely little room with stained glass windows, and a local photographer and the hotel owner as witnesses, we became a married couple. No stress, no anxiety, no details. Perfect.

The cover, a 1932 painting by Harold Knight called Girl Reading, may just be one of my favorite paintings in the world. I love every detail. The eyes that remind me of the Stephen girls [Virginia Stephen Woolf and Vanessa Stephen Bell], the folds of the clothes, the faint look of ennui in her expression, the view out the window.

taken from a 1932 design for a printed dress fabric by Madeleine Lawrence for the Silver Studio © MoDA, Middlesex University 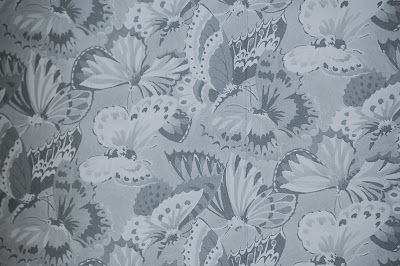 The book was first published by Leonard and Virginia Woolf's Hogarth Press.

Other reviews in no particular order (you may click the numbers):