An April Shroud by Reginald Hill 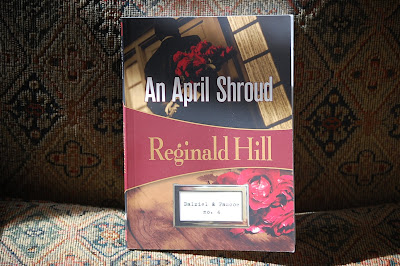 
I'll admit it. My name is Nan, and I am powerless over the Dalziel & Pascoe series by Reginald Hill. You may have noticed that I had the Persephone Reading Week Challenge on my sidebar for a while. It began August 24, and I was thrilled to begin Cheerful Weather for the Wedding. I was quite sure I'd finish in a week, and have something to post for this special week of reading. But the only thing is that I had recently gotten the fourth D & P book in the mail. It didn't just call to me from the shelf, it shouted. I couldn't ignore it. So then I thought, okay, I'll read Cheerful Weather downstairs and An April Shroud upstairs. And that didn't work either because I began bringing April downstairs in the morning. Pretty soon, I put aside Cheerful Weather until I could finish this 1975 mystery.

For most of the story, I didn't really know what was going on, but then again, neither did Andy Dalziel. I just went along for the ride, sitting beside him, with 'nowt' to offer. It begins with Peter Pascoe's wedding. As he and Ellie go off on their honeymoon, Dalziel has decided to take some vacation time.

It was supposed to do him good, to rid him of the irritability and fatigue which had begun to dominate his working life in the last few months.

There are incredible rains and his car gets stuck. He is picked up by a punt which is part of a watery funeral procession. He ends up at the Fielding house, and quickly becomes absorbed in the daily life. These people are all a little 'out there.' No one seems very sad about the recent death - not the wife, not the children, not the father of the man. Why is that? And Mr. Dalziel finds a dead rat in the freezer. Who would do that?

Lots of details, lots of characters, interesting mystery, and the bonus of getting to know Andy Dalziel better. He is a character like no other I've ever met in mysteries. As I've said, I love these books, and I love these Felony & Mayhem editions. This is the last one in sequence that they offer, so I've ordered the next two from online used bookstores. Last night I began A Fortnight in September, but today the fifth in the Dalziel & Pascoe series, A Pinch of Snuff, arrived and I've already begun to read it. Uh-oh, I see history repeating itself.

There is a wonderful post on the publisher here.
Posted by Nan