The Clicking of Cuthbert by P.G. Wodehouse 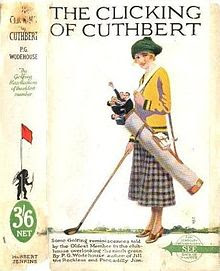 Since Letters from a Hill Farm began in 2006, I've written only one book report on a book by P.G. Wodehouse - Something Fresh. I reread The Rummy Affair of Old Biffy in 2007, and Thank You Jeeves in 2008. I read Love Among the Chickens in 2008. But I didn't write about any of them. Most of my reading of Wodehouse happened in the years before I began the blog. For quite a time, I was completely immersed in his world, of which Evelyn Waugh once said,

Mr Wodehouse's idyllic world can never stale. He will continue to release future generations from captivity that may be more irksome than our own. He has made a world for us to live in and delight in.

Well, some of my happiest reading moments have been spent delighting in that special Wodehouse land.

I think he is one of the greatest writers of all time. Because he is funny, he isn't often given the credit or acclaim which he deserves. We somehow think humor isn't genius. Well, it certainly can be, and is when it comes to PGW. His wit and his intelligence are beyond compare. As is the amount of his output. If you go to Fantastic Fiction you may see a list. It takes one's breath away. The Cat-Nappers or as it is also known, Aunts Aren't Gentlemen is one of my very favorites and it was written soon before he died, at 93 years old! The man stands alone.

I have not read all his work by any means, but I have read a lot. Yet a 'lot' of Wodehouse isn't nearly all, or enough, and I've decided to begin reading the ones I haven't read. I started with The Clicking of Cuthbert, one of his golf books. Do I play golf? No. Am I the least bit interested in golf? No. Did I adore this book? Yes (with a qualification to follow later). It is comprised of mostly romantic situations which are resolved through the knowledge of and/or the playing of the game. It is clear that to those who love it, golf is a minor (?) religion.

The Clicking of Cuthbert contains ten short stories, one of which is the book's title. Throughout the stories a famous Wodehouse character makes an appearance. He is only known as 'the Oldest Member.' He is a golfer grown old. His time is still spent in the clubhouse, usually in the 'smoking room,' or out on the terrace, and he is always available to give advice to the younger generation in the form of a story.

Pelham Grenville Wodehouse loved golf, and here he is in 1924 at the golf links with his wife Ethel, and her daughter Leonora, whom Wodehouse adopted. 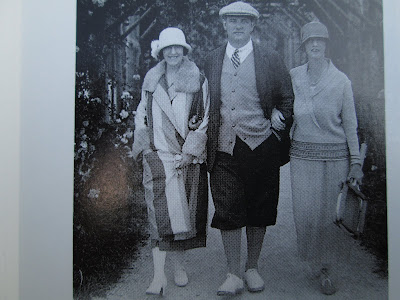 The Clicking of Cuthbert begins with a young golfer dropping his clubs in the clubhouse and announcing that he is giving up golf.

"Blanked infernal fat-headed silly ass of a game! Nothing but a waste of time."
The Sage winced.
"Don't say that, my boy."
"But I do say it. What earthly good is golf? Life is stern and life is earnest. … Can you name me a single case where devotion to this pestilential pastime has done a man any practical good?"

"I could name a thousand."

And he goes on to tell how Cuthbert Banks wins the girl and happiness through the game of golf. There's a funny line in which a Russian novelist, who is all the rage, says

"No novelists anywhere any good except me. P.G. Wodehouse and Tolstoi not bad. Not good, but not bad. …"

In Sundered Hearts, the reader is told that

A lifetime of observing my fellow-creatures has convinced me that Nature intended us all to be golfers. In every human being the germ of golf is implanted at birth, and suppression causes it to grow and grow till - it may be at forty, fifty, sixty - it suddenly bursts its bounds and sweeps over the victim like a tidal wave. The wise man, who begins to play in childhood, is enabled to let the poison exude gradually from his system, with no harmful results. But a man like Mortimer Sturgis, with thirty-eight golfless years behind him is swept off his feet. He is carried away. He loses all sense of proportion.

The stories proceed along, giving this reader an almost constant smile and some moments of outright laughter. The situations are quite ridiculous but are faced with great solemnity which makes them even funnier. I felt nothing but joy until I came to The Rough Stuff. A woman named Eunice loves novels where men were like

'brusque cavemen' who treated women like dirt.
What she wanted was a great, strong brute of a fellow who would tell her not to move her damned head; a rugged Viking of a chap who, if she did not keep her eye on the ball, would black it for her.

I'll tell you, those words chilled me. Those of us who read older books have noticed, and written about, the occasional racism and anti-semiticism which fly out of an author's pen without a thought. Well, there's another thing that I see in older books, and that is the hitting of women. It is often joked about, without any apparent wincing on the part of the writer.

There's an old song from the 1930s which makes me cringe called I Wish I Were In Love Again. Here are a few of the lyrics:

The sleepless nights,
the daily fights
the quick toboggan when you reach the heights
I miss the kisses and I miss the bites
I wish I were in love again!

The broken dates,
the endless waits,
the lovely loving and the hateful hates,
the conversations with the flying plates
I wish I were in love again!

The furtive sight
the blackened eye,
the words "I'll love you till the day I day"
the self-deception that believes the lie
I wish I were in love again!


If this is love, I sure don't want it. Nowadays we read of 'domestics' in the local police reports, but I have a feeling that years ago the police weren't even called (as is sadly still the case sometimes). It was part of the 'right' of a husband to hit 'his' woman. And what is almost worse, is when I read of women like Eunice who want that kind of treatment.

Anyhow, it may be a quibble, but nonetheless it spoiled what had been a lovely little collection of stories. As much as I enjoyed the hapless fellows and the salvation which golf brings, this little section taints the book for me. I'm quite positive Wodehouse himself was the gentlest of men, but this sentiment may well have been in the air, and thus he could write about it with no fear of disapproval from women, except this one ninety years later.
Posted by Nan