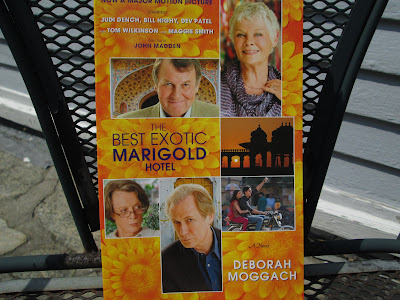 The book cover looks very like the colors in my yard just now. 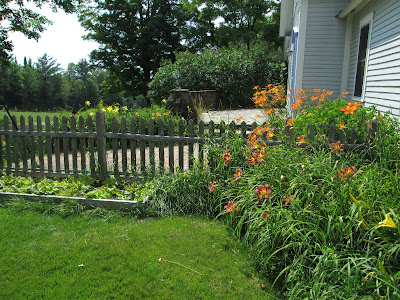 In The Best Exotic Marigold Hotel we meet several people, from Dorothy, a lonely former BBC employee to also lonely Evelyn, a widow who has never held an outside job; from inconsiderate, self-absorbed Norman to kindly Douglas. We also get to know the various children of these older people, and several much younger men and women. It is a book large in scope but filled with details and descriptions which make it easy for the reader to become familiar with everyone. What they all have in common is the Marigold Hotel in Bangalore, India, an alternative life for older English individuals facing elderly residential living. The people take a leap of faith, and their lives (and prejudices) are changed in the process as they move from England to India.

Sealed into their compound, the residents lived in a world that was, in many ways, more familiar than the England they had left behind. It was an England of Catherine Cookson paperbacks and clicking knitting needles, of Kraft Dairylea portions and a certain Proustian recall.

Yet outside their hotel is India in all its glory. Bustling, noisy, full of all the various conditions of people.

Much is made of the dangers in England compared to the safety in India. I so hate to think that present-day London is as described in this book with muggings, old women not feeling safe in their long-lived in, long-loved homes, and gangs of youths scaring and harming people. I'm hoping the author exaggerated in order to better show why these folks would be happy to go off to a strange-to-them, new land.

I bought the book as soon as I heard about the movie, which I was terrifically excited to see. I read the book first, and then was quite disappointed in the movie version. It felt like a not-very-good translation of a book. Almost every facet of the book was changed except for some names and the hotel. I wonder if Deborah Moggach found it almost unrecognizable. I know I did. Afterwards I said to Tom that I didn't really like it that much, and he agreed. He used the adjective, 'contrived.' And it is. Contrived from the basic story. Snatches taken here and there. What I liked about the film were Judi Dench, Bill Nighy, and India. The colors, the bustle, even the cremation. I have a longing for that country which I don't understand. Our friends who went with us said they couldn't take the crowds which would usually be my own feeling, but there's something about India that draws me. My friend wondered as we left the theatre if it was really safe for those people, particularly the women, to wander the streets, even at night, in such a carefree, fearless manner. I told her that the book mentions it being safer than England, but of course I didn't know the truth, until just recently when I came upon an article exposing the dangers to women in at least one part of India. It doesn't mention foreign women, but being an Indian woman is wrought with danger and humiliation. Another piece talks about Indian crime statistics.

The Best Exotic Marigold Hotel is quite a good story. Good, but not great. Good characters, but maybe too many. And I will offer a caveat. It quite vividly describes a number of bodily functions, which often seemed gratuitous to me. I liked the book better than the movie, but I didn't love either one. Still, the book offered lovely passages, and interesting people, and a reading experience I'm happy to have had.

The author's website is here. It is interesting to read in her 'news' section that the book was prescient. Places like this are showing up in various countries now.
Posted by Nan