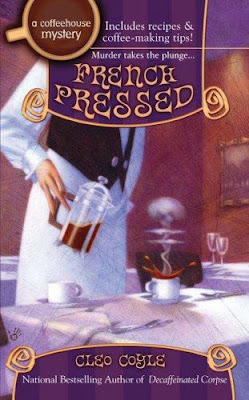 
Clare Cosi's daughter, who attends culinary school, comes upon two murdered people - a friend and the chef she is interning with - and is charged with killing them. She is sent to Rikers Island jail until a judge can decide if she will be allowed out on bail. The police have decided she is the culprit and do not intend to investigate further. Clare and her ex-husband Matteo know that Joy is innocent. Clare joins forces with her policeman friend Mike Quinn to find the killer and thus free Joy.

In French Pressed we get a brief and interesting glimpse of Brighton Beach, and learn quite a bit about upscale restaurant life. Who knew that chocolate mousse was passé?

You start putting traditional chocolate mousse and creme brulee in your dessert selections, and the gourmands will declare you zombified ...

One of the many pleasures of this series has been watching Clare grow into her sleuthing work. At the end of this book Mike actually suggests that she might want to become a Private Investigator. She is quick thinking, has good instincts, and is really quite fearless.

The characters and relationships in the series change over time. The reader has seen Joy grow into a young woman who makes mistakes. Clare worries about her. She has to confront some behaviors and let others alone. It is not easy being the parent of a child in her early twenties.

The husband and wife team of Marc Cerasini and Alice Alfonsi who write as Cleo Coyle consistently impress me with the intelligence and heart in their books. I love this series.

French Pressed is my ninth book for the Foodies Read 2 Challenge.