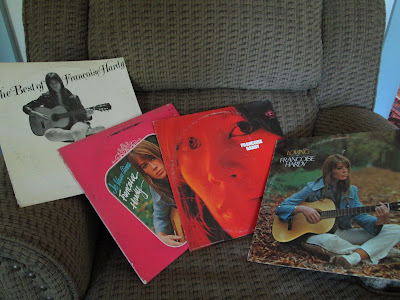 What on earth prompts a young American girl to listen to a young French girl sing in French? That was me in the late 1960s, listening to Françoise Hardy albums. For most of us in the US we were first introduced to her in a famous scene in the 1966 movie Grand Prix. Happily I found it, with a little bit of James Garner afterwards.

She was the essence of cool to me. Her songs in English, and the ones I couldn't understand in French, created a grownup world I was just beginning to enter. On the album Françoise Hardy there are translations in the liner notes. I can remember poring over them. They are all about romance and relationships. For example in the song 'Quatre Fois'


Four times now winter has come and the falling snow still speaks of you. I sit down on every bench and I wait for you. Four times I have seen the rust colored leaves which died in autumn beneath our feet as we walked in the woods - do you remember? We'd be walking and people would say 'How happy they are, how happy are those two!'

Heady stuff for a young girl. In those days, I was immersed in the poetry of Kenneth Patchen, and even Rod Mckuen for a while. ee cummings was so important in my life that for years I never used capital letters. My one venture into writing poetry was on black paper using white ink. Sadly (?) it has disappeared.

In those days, I didn't know anyone else who listened to her music. And I still don't except for a woman who left a comment on my blog four years ago. When I went over to hers, Life Must Be Filled Up, and saw the name Françoise Hardy on her sidebar, I knew I had come upon a kindred spirit.

I am still a fan, and have her 2010 album La pluie sans parapluie (the rain without an umbrella). It is lovely. 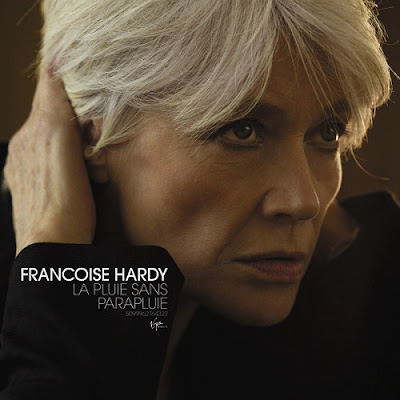 Françoise has a website. It is thrilling to see that she has over 50,000 friends on Facebook. Apparently my blogging friend and I were not the only ones listening all those years ago.

Here is a sweet little video of a song which is on my The Best of Françoise Hardy album.

If you go to YouTube, you'll find lots more. There is also a great tribute on the The Style Notebook, where I was pleased to read that a favorite artist Feist was influenced by her.

This is an offering for Paris in July. 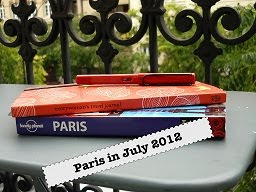