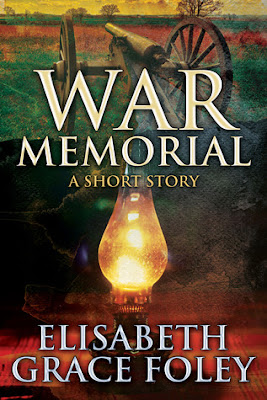 I found myself thinking this morning that ebooks are a little like the magazines of the past which used to include short fiction within their pages. The reader is able to buy one short story for under a dollar, and get to know a new author. War Memorial is a wonderful story that would have easily been accepted by the magazines of yore, probably for the July 4 issue, or the November 11 issue.

This is a story of how meeting 'the enemy' face-to-face changes a person's view on war. In this case it isn't soldiers, but a soldier and a sixteen-year-old young woman in 1863 just before and after the battle of Gettysburg. The story begins in 1946 with the Darrell family sitting around listening to the radio on a rainy day when the power goes off. While bustling around looking for matches and candles, one of the children opens an old box on top of the piano. Inside are tucked away mementos, and at the very bottom is 'a small lump of some dull gray metal, of a vaguely recognizable shape, heavy for its size.'

When Matthew asks what it is, his father Paul tells him

"That's a bullet from the Civil War. That was taken out of a Confederate soldier after the battle of Gettysburg."
"How do you know?" asked Matthew somewhat suspiciously, viewing the lump of lead with eight-year-old skepticism. …
"I know," said Paul, smiling a little as he tossed the bullet gently on his palm, testing its familiar weight. "You see, this was my grandmother's most prized possession."

Well, that certainly gets the family's and the reader's attention. Soon the short story goes back to that long ago year, and we learn the remarkable truth behind this bullet.

War Memorial ends with the children going up to bed

… in the dark, with the warmth of the past close around them.

So beautiful. I dearly loved this story, and went looking for more by the author. I bought Elisabeth Grace Foley's collection called The Ranch Next Door and Other Stories. It is available for the Nook and Kindle, and is also in paperback.

War Memorial is, as far as I know, available only on the Kindle. It was published in 2012.

You may have seen the author's blog under my 'Bookish' blog list on the sidebar. It is called The Second Sentence.
Posted by Nan