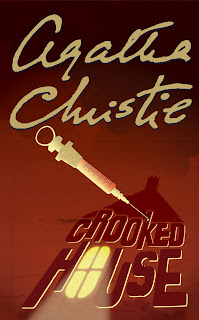 This book is one of my own special favourites. I saved it up for years, thinking about it, working it out, saying to myself: "One day, when I've plenty of time, and want to really enjoy myself - I'll begin it!" I should say that of one's output, five books are work to one that is real pleasure. Crooked House was pure pleasure. … I don't know what put the Leonides family into my head - they just came. Then, like Topsy "they growed." I feel that I myself was only their scribe.

Agatha Christie
From the Foreword to Crooked House

Her words stayed with me all through my reading of the book, and made it even more fun than it would have been not knowing it was one of her favorites. Well, 'fun' may not be quite the right adjective, though it can be fun to shiver with apprehension as one reads along. The book began with a young couple in love and is narrated by the man, Charles. My first thoughts about his beloved, Sophia were that she was to be one of Agatha's delightful, spunky, upbeat heroines. And she was, mostly, but it is hard to live up to all those adjectives when your grandfather is murdered and the killer must be a member of the family household!

The Leonides family consists of the grandfather, his second wife, his two sons, their wives, the three children of one of the sons, of whom Sophie is one, and the grandfather's sister-in-law (from his first wife, the sons' mother), as well as the old Nannie, and the two younger children's teacher. The house is divided into sections so each family group has their own quarters. Sophia tells Charles about the house.

"'And they all lived together in a little crooked house.' That's us. Not really such a little house either. But definitely crooked - running to gables and half timbering!"

"I think that's what I mean when I said we all lived together in a little crooked house. I didn't mean it was crooked in the dishonest sense. I think what I meant was that we hadn't been able to grow up independent, standing by ourselves, upright. We're all a bit twisted and twining."

And boy is that ever the truth! As the story goes on, we see all the little idiosyncracies in this family. Charles happens to be the son of a Scotland Yard policeman so he becomes quite involved in the post-murder life of the Leonides. His father appreciates him being a kind of johnny-on-the-spot, the eyes and ears of the police without intimidating the family. One of the sons was the father's favorite, even though he was an utter failure at the family business. The second son never got the attention he feels he deserved. Sophia's younger brother and sister, Eustace and Josephine, are odd, to put it mildly. The whole family hopes the killer is the young wife of the grandfather. They think that maybe she and the tutor are in love.

And with that, I have said enough. This is truly a book you'll want to discover on your own, making your way along in its pages, trying to figure out who on earth 'dunnit.' When there is a second attempt at murder, I became even more baffled. Crooked House would have made a fantastic movie, and I've just read that the most talented Julian Fellowes is doing the screenplay, the cast has been hired, and it is supposed to come out next year.
Posted by Nan