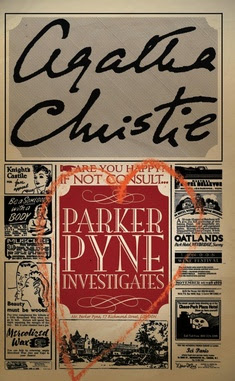 
What if you were looking through the newspaper and happened upon an ad which said:

Are you happy? If not, consult Mr. Parker Pyne.

This is the premise for Agatha Christie's collection of most delightful short stories. Delightful? Yes, really. No terrible crimes. Just a large, retired man who wants to help people. He tells a client that

Theft and crime are not in my line at all. The human heart is my province.

One of his 'greatest assets' is his 'sympathetic manner' which puts clients at ease when they come to him. There are operatives who help in the work, including Ariadne Oliver who is first introduced in this book. Miss Lemon who later works for Hercule Poirot also makes her first appearance. And then there are the 'lounge lizard' and the sultry beauty who pretend to be various persons to aid Mr. Pyne in little dramas he stages. Even though I knew he employed them, I was often surprised when their identities were revealed at the end of a story. The first few involve clients who visit Parker Pyne's office, while the second batch of stories deal with people he helps while on vacation.

In her foreword to the stories, Agatha tells us which ones are her favorites, and where she got her inspiration for one of them - The Case of the Rich Woman. Agatha was looking into a shop window some years before when a woman came up and said:

I'd like to know what to do with all the money I've got. I'm too seasick for a yacht - I've got a couple of cars and three fur coats - and too much rich food fair turns my stomach.

When a 'startled' Agatha suggests, 'hospitals,' the woman replies that she doesn't want 'charity. I want my money's worth.'

And thus a story brews in an author's mind.

It makes me smile just thinking back upon these stories. Pure pleasure. Highly recommended.
Posted by Nan