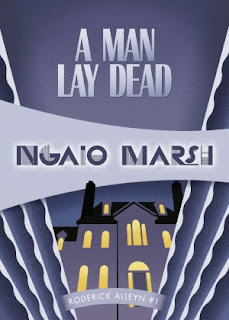 
I am now officially a Ngaio Marsh fan! I read the first Inspector Roderick Alleyn book in March, and I loved it. Marsh is considered one of the great writers of the Golden Age of Detective Fiction, and now I know why. Her writing is crisp and clear, her characters well-drawn, and the mystery itself was a very good one. A number of guests have been invited to a country home and one of the entertainments is to be a game of murder. One person is to be the 'murderer' who shall choose his or her victim. When the murder occurs, the murderer is to ring the gong. The lights go out, the gong is rung, but instead of a game, a real murder has taken place.

Roderick Alleyn is educated and upper-class. He has connections with the aristocracy. He's an interesting character and I expect in the later books, the reader gets to know him better.

I did try the second in the series, The Nursing Home Murder but didn't finish. It involved a man who died just after an operation, and I just wasn't interested in all the medical details. I'll certainly pick up more by the author as time goes on.
Posted by Nan