I read Out The Window in the New Yorker back in January. 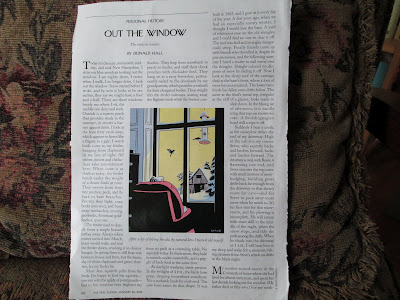 I cut it out and put it in my computer desk drawer to have close at hand when I wrote about it. Well, here we are in May. I have thought about this essay a lot in the intervening months.

I first encountered the writing of Donald Hall in what I think is a masterpiece of nostalgic, sometimes elegiac writing, String Too Short To Be Saved published in 1961. 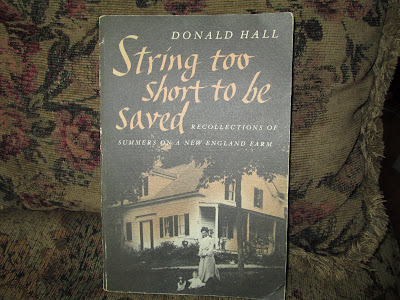 My copy is a second printing twenty years later and autographed by the author when he, his wife, the poet Jane Kenyon, and Maxine Kumin visited my little town in 1989. I think back on that magical evening and wonder if I dreamed it. I've read the book twice, and am feeling a pull to go back to those pages again, and soon.

Right from the start of Out The Window, he doesn't flinch from seeing his life as it is.


Today is January, midmonth, midday, and mid-New Hampshire. I sit in my blue armchair looking out the window. I am eighty-three, I teeter when I walk, I no longer drive, I look out the window.

And he tells us in poetic detail about what he sees from that window - the snow, the birds and squirrels, the cow barn, 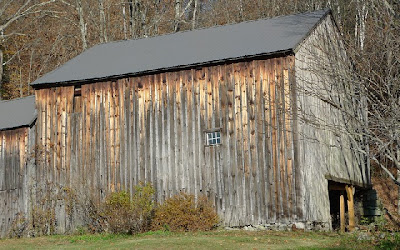 built in 1865, which he gazes at 'every day of the year.' There is a chickadee perch


a rusty horseshoe, permanently nailed to the doorjamb by my grandparents

He lives in his grandparents' house.

The past is all around him, supporting him rather than crushing him. As he looks out the window, his thoughts turn to his family, of his mother in a nursing home, still reading before she died at almost ninety-one.


A week before she died, she read "My Antonia" for the tenth time. Willa Cather had always been a favorite. Most of the time in old age she read Agatha Christie. She said one of the advantages of being ninety was that she could read a detective story again, only two weeks after she first read it, without any notion of which character was the villain.

As he describes the narrowing of his life, he says that


New poems no longer come to me, with their prodigies of metaphor and assonance. Prose endures. I feel the circles grow smaller, and old age is a ceremony of losses, which is on the whole preferable to dying at forty-seven or fifty-two. [his wife; and his father] When I lament and darken over my dimishments, I accomplish nothing. It's better to sit at the window all day, pleased to watch birds, barns, and flowers. It is a pleasure to write about what I do.

And his pleasure is also mine. If there are to be no more poems, that's alright. I think, in fact I know, that I love his prose even better. I like the details, the descriptions, the longer form of telling.

There is also humor in this lovely piece.


My grandmother Kate lived to be ninety-seven. Kate's daughter, my mother, owed her early death to two packs a day - unfiltered Chesterfields first, then Kents. My mother was grateful to cigarettes; they allowed her to avoid dementia.

And then, Donald Hall offers a most telling sentence, one that I think defines him, as it does me.


When I was a child, I loved old people.
… After a life of loving the old, by natural law I turned old myself.

He writes of that 'antiquity,' that 'unknown, unanticipated galaxy.' We all know this feeling. Remember the first time the young check-out person at the supermarket called you ma'am? That is the beginning - when we are thirty-five, and those who are 20 see us as a whole other generation. What? Me, old? No, I'm the same. You just see me differently. It was Gertrude Stein who most brilliantly said, 'we are always the same age inside.' I wore a tee shirt with her face and that quote when I was younger. I believed it then and I believe it now. When a young friend of Matt and Margaret's said he saw saw me dancing at Rusted Root and knew it was me because of my white hair, I was taken aback, surprised, before I remembered that oh, yeah, I do have white hair now. It's a mysterious realm that we, who are lucky, get to visit. There are indeed 'limitations' and 'narrowing circles' but there are also depths of understanding, appreciation, and remembrance that come with those years. If only more of the young loved old people. Then the condescension, the dismissal by others wouldn't be a part of old age.

This essay is a brilliant piece of writing. It creates in me the strength of feeling that I usually only have when I read poetry.

I am happy to say that there is an online phone interview with Donald Hall done at the time the essay was published. I know twelve minutes can be hard to set aside in a busy day, but I so hope you can listen. There's another interview here.

I've written about Donald Hall quite a few times in my letters. If interested, you may type his name into the search box to find the postings.

I find this photo very touching. It's like his arm is around the chair which should hold his late wife or grandmother or grandfather on that porch where they all sat in their lifetimes. 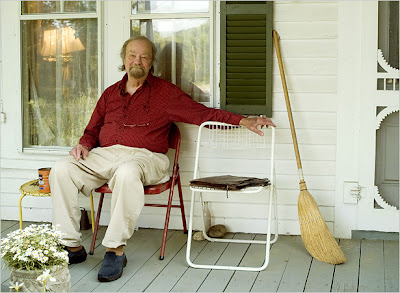 This is my second essay for the Essay Reading Challenge - 2012 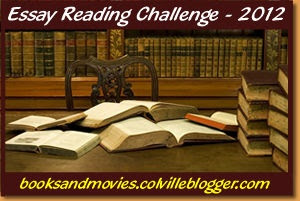