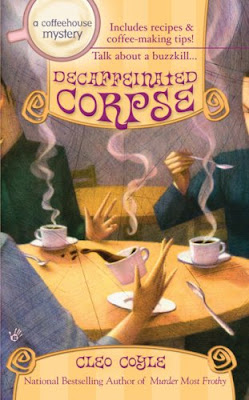 
In every one of the Coffeehouse mysteries, Cleo Coyle teaches the reader more about this beverage. I'm constantly amazed at how much there is to learn. As you may have guessed from the title, this installment is all about decaffeinated coffee. Our heroine sleuth Clare Cosi and her team of baristas at The Village Blend are facing the fact that more and more people want this coffee option, and that they need to drop their prejudices against decaf, and look into it more seriously.


Most baristas viewed asking for decaf on a par with asking a French chef to hold the butter. Even coffeehouse slang had labeled it a "why bother?"
Still, the last time I'd researched the subject for a trade journal article, I'd learned that fifteen to eighteen percent of coffeehouse customers wanted the lead out. The Village Blend was coming up short in that department. Over the years, we'd given a number of decaffeinated methods a shot on our menu, but maintaining the trademark Village Blend quality had been a challenge.

Then the book goes on to explain the whole process.


Decaffeination robs beans of their acidity (coffee speak, not for bitterness but the lovely brightness of flavor that keeps the drink from tasting flat). On top of that, the best decaffeination methods required fifty-five bag minimums. To manage that amount, the Blend had to rely on a third party roaster, since decaffeinated green beans had a significantly shorter shelf life than untouched beans. But that solution went against our century-old philosophy of micro-roasting daily.
The product quality sank so low, we just pulled it.

Frankly, I could read a book that was just about the coffee world. I find this stuff fascinating - like olive oil or wine or whisky, there is so much involved. Esther, one of Clare's baristas had just read in a science magazine about how caffeine works.


Caffeinated coffee stimulates frontal lobe activity in the brain, so working memory is improved. It also lights up the anterior cingulum, which controls your ability to focus attention.

So, when Clare's ex-husband Matteo, whose work is traveling the world in search of the best coffee, announces that an old friend Ric has a new and better way to produce decaffeinated coffee, there is a lot of interest. Ric is coming to New York to the International Coffee Growers Exhibition to offer a taste testing of his revolutionary scheme. Upon arrival he is attacked and left in an alley, and does not want the police involved.

There's a lot going on in this book. In addition to the coffee angle, there are old friends bringing their pasts to the present. Clare and Matteo's daughter Joy is, as always, worrying Clare. Clare's policeman friend Mike Quinn makes a welcome appearance.

This book is an homage to New York City, as are the others in the series. As Clare drives around, we the readers are passengers looking out the window. When Clare arrives at Dag Hammarskjöld Plaza, 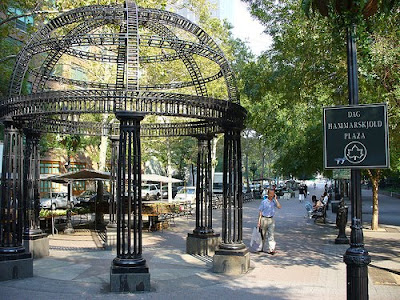 she says to her mother-in-law


"Dag Hammarskjöld Plaza. Okay, I've finally found a winner for the most obscure, hard to pronounce place name in New York City."
"Clare, I'm surprised at you. Don't you know who Dag Hammarskjöld is?"
"What do you mean who? Are you telling me Dag Hammarskjöld is a name?"
"He was secretary general of the United Nations. He died in a plane crash in Africa in the 1960s. He also won the Nobel Peace Prize. In my time, every schoolchild knew his name." Though I'm many years younger than Clare's mother-in-law, 'in my time' we all knew his name as well. I was stunned that nearly forty-year-old Clare had never heard of him. This is another example of why I love these books. They offer history in a most palatable and interesting form.

The Coffeehouse mysteries are part mystery, part history, part cookbook, and pure fun. There are coffee tips and recipes, as well as desserts and main meals to go along with your coffee. Here's a fun one from Decaffeinated Corpse:

PB and Nutella Sandwich
Peanut butter
Nutella
2 slices of bread
In this sandwich, the jelly in your PB&J is replaced with Nutella. 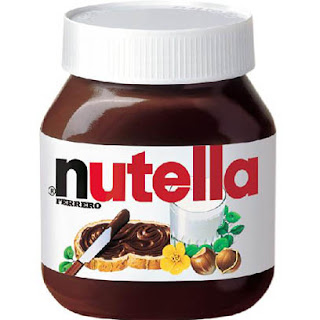 What is Nutella? It's a wonderful hazelnut chocolate spread that originated in Italy, where the hazelnut is king. Most major American grocery stores now carry it. Look for the jar in the peanut butter aisle. And speaking of peanut butter, if you actually need the recipe, here it is:
Spread peanut butter on one slice of bread. Spread Nutella on the other. Put the slices together and enjoy. (Hey, didn't somebody once say peanut butter and chocolate go well together?)

Please do visit the incredibly complete website. I could easily spend a whole day or more there.
Posted by Nan