All I could wish for Mother's Day weekend … 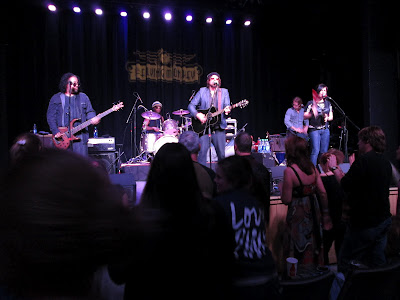 was having Michael, Margaret and her boyfriend Matthew, and Tom alongside me in the fourth row from the stage at a Rusted Root concert! We had THE BEST time. Every single person in the place was on their feet dancing for the whole show. It is amazing to realize that Margaret was 12 and Michael was 9 when the When I Woke album came out. It is still just as great all these years later, as is the band. If you ever get a chance to see them, don't pass it up. They put on a great show. The audience consisted of people younger than Michael and older than Tom and I. That's a rare band that appeals to all ages.

I mentioned their wonderful song, Send Me On My Way in a sad posting from four years ago.