For the very first time, we have planted a rhododendron. In recent years they have become almost as prevalent as lilacs in dooryards around here. This one is a PJM Elite which is supposed to be hardy in Zone 4, to -30º F. It is in the yard right outside the kitchen door, in between a mass of daylilies. It will bloom while the daylilies are small, and they will blossom after the the bush flowers have gone by. I'm hoping it will grow on this windy cold hill. It should be somewhat sheltered where it was planted. 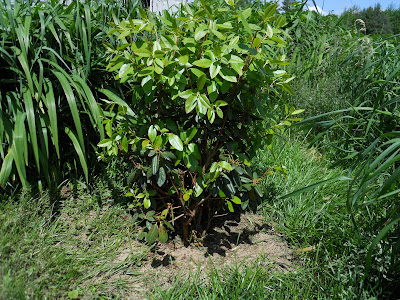 This year's planting of the vegetable garden was late because of so much rain. And so, we've been working out there in black fly season, which is enough to drive one mad. Tom's mother has two sayings about black flies - one that when the serviceberry blossoms the black flies will come, and the other is that black fly season is Mother's Day to Father's Day. If you'd like to learn a bit more about the shad or serviceberry Tom wrote about it here three years ago. Those black flies haven't been too bad the past few years but this year, probably because of all the rain, they have been terrible. After coming in on Saturday from planting in the garden, I had about ten bites all around my ears, which seems to be a favored dining area for them. A dear man, now long gone, used to say that he thought the cure for crime was not jails, but to put a criminal, naked, in a cage outdoors during black fly season!

May 28 was a big day for the baby chicks. Tom and Matt carried the box out to the barn. They will live in a safe, enclosed area until they are bigger. 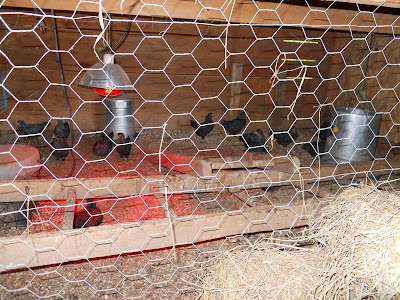 The animals and other chickens will be able to see them and get used to their presence so that when they go out into the rest of the barn and outdoors in a few months, the transition will be smooth and peaceful. 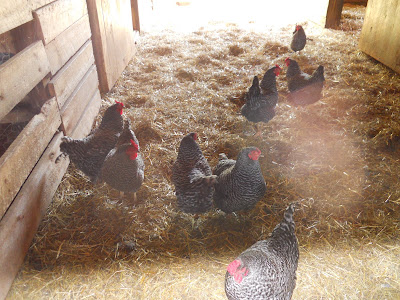 By the end of Memorial Day weekend the lilacs had begun to fade. I'm always saddened when they go by. They bring such beauty and color and fragrance and though other flowers are still to come, it is the lilacs I really love. But then my sadness is assuaged when the locust trees come into bloom, and I think, ah yes, this is my favorite fragrance; until the sweet peas come, that is. 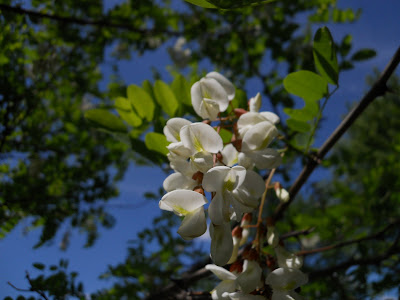 We planted our six tomato plants we had started from seed. I'm hoping it won't be too crowded in the one raised bed. The varieties are Camp Joy Cherry and Big Beef Beefsteak, both from Renee's Garden, and Cosmonaut Volkov Slicing Tomato from High Mowing Seeds.

I planted Dark Red Morland potatoes from Johnny's Seeds on the last day of May. A little late, but they should be fine. They took up one whole bed and part of another.

This past weekend we got the rest of the garden in. 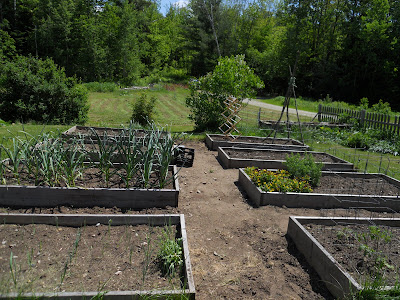 There's a bed of the Zephyr summer squash from Johnny's. There's a whole bed for peas, what Johnny's calls Premium, an early pea. I sure hope so since we planted it so late. We haven't grown them for a few years, and I have missed them. They are one vegetable that I think simply must be eaten out of the garden. Frozen peas just can't compare. Even if I have only four or five meals in the summer, it is worth it to me to plant them.

Last year we grew pole beans for the first time and they were such a success that I think we'll stay with this variety from Renee's Garden, Filet Beans French Gold. Last year they grew in tall tomato cages, but this year Tom took some tree branches and made a teepee, tying the tops together with baling twine. 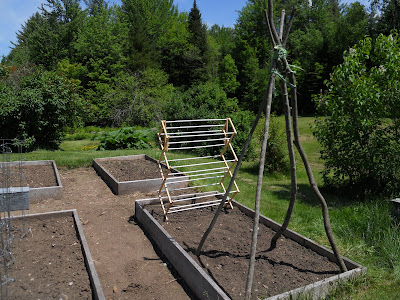 In the same bed, I tried something new for our sweet peas. Instead of using cages or fencing, I brought out a clothes rack which Tom secured into the ground. I put one variety on each end and one in the middle. I have high hopes that this will be a great support for them, albeit a little unusual. I grew two varieties from last year, Cupani's Original and Painted Lady, and a new one called Royal Wedding in honor of THE wedding this past April. All are from Renee's Garden.

Yesterday, after our godson's college graduation party, we headed to Lowe's for wood to build one more raised bed. This one is on the other side of the fence from the patio. It will probably hold the onion sets, which we are also late in getting in this year, and a cage of cucumbers. We have panolas, mallow, and sweet peas in the vegetable garden, and now we'll have vegetables in the flower garden. 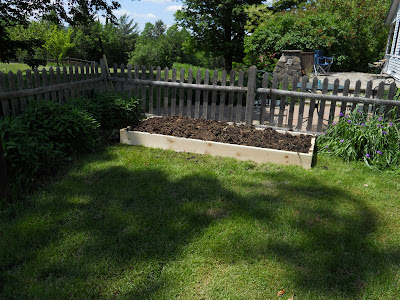 In the flower gardens, the bleeding heart plant has turned into an almost five-foot tall bush. 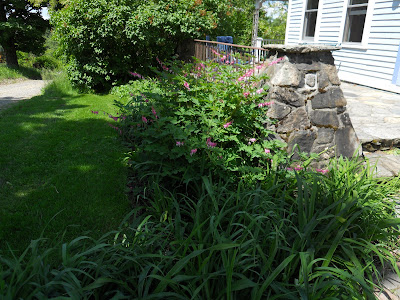 The lupines are in their glory. 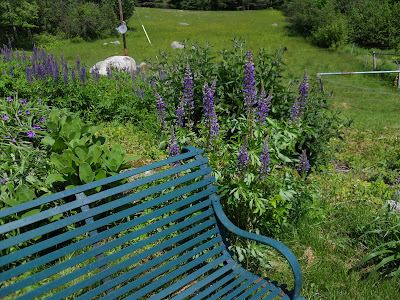 In 2008 I wrote about this being the indigo time of year. 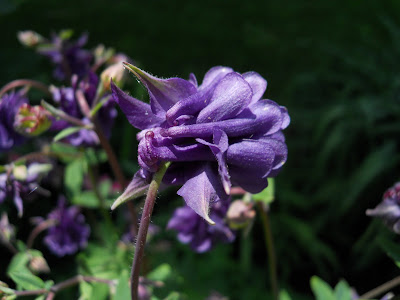 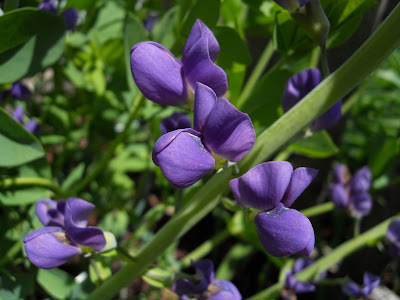 Mountain bluet also known as Perennial cornflower and Perennial Bachelor's button - there's a little entry on this flower which I wrote four years ago. 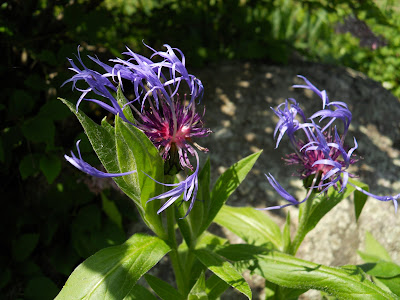 Spiderwort, with the 'or' sound as word, not wart, according to Henry Mitchell. 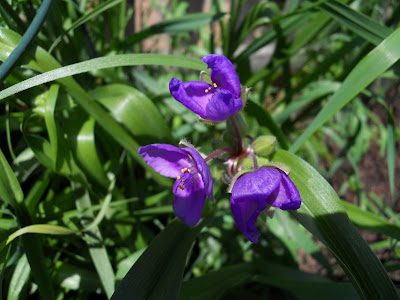 There is very little work to do amongst the flowers. All of them are perennials which come up every year, and they are planted close enough together that by this time of year, no weeding is necessary. The only job now will be cutting them back at the end of their growing season.
The bluebirds are happily settled in. Usually they sit together on the wire morning and evening. I don't think there are two pairs, but am still not positive. Just this morning when I opened the laundry room windows, the female flew out of the birdhouse under the eaves, 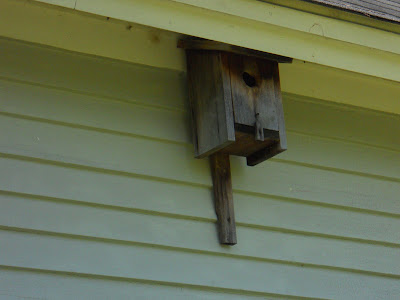 and up onto the old tv antenna [query: why do we still have this?] 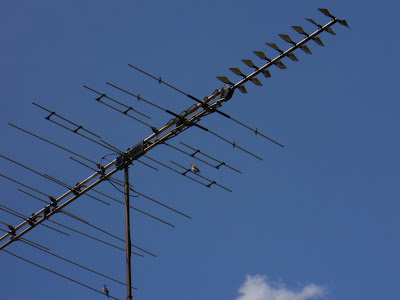 So, that's it for this report. I should be back in not too long with the Korean lilacs and Siberian iris and poppies.
Posted by Nan