Gently Does It by Alan Hunter 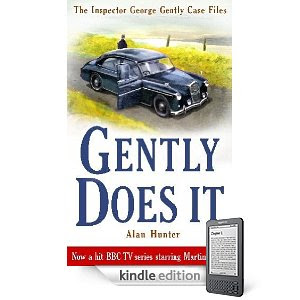 I was wondering what to read on my Kindle after the last Deborah Crombie, when I saw on Margaret's blog that the George Gently books are available. She later reviewed Gently Does It here.

I first heard of Mr. Gently from the superb English television series. It stars Martin Shaw, and is available from Netflix, and also to buy from Acorn. The younger associate isn't in this first book and I'm wondering if he shows up later, or is just in the television version. 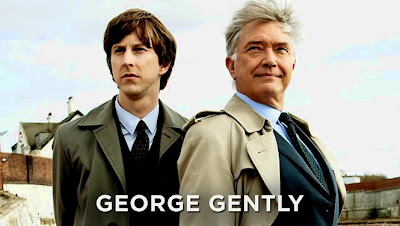 Before the book begins, there is 'a gentle reminder to the reader' from the author, which I found charming. Alan Hunter sets up the whole series by telling us that:

This is a detective story, but not a 'whodunit'. Its aim is to give a picture of a police investigator slowly building up his knowledge of a crime to a point, not where he knows who did it - both you and he know that at a fairly early stage - but to a point where he can bring a charge which will convince the jury.
I thought it worthwhile mentioning this. I hate being criticized for not doing what I had no intention of doing.
Sincerely yours,
Alan Hunter

Chief Inspector George Gently is on holiday when he reads a newspaper headline saying that 'foul play' is suspected in the death of a timber merchant. He pays a visit to the local police department offering his help and finds they were just going to get in touch with him. The murder victim is universally hated, and the people around him are odd, probably because of how he dealt with them. Gently has a light sense of humor. In the tv shows, he has lost his wife, but there's no mention of that in this book. He seems to be a single man, who is quite content with his job and his life. He adores peppermint creams. He goes about his work quietly and without much stress and strain - a very different detective from any I've yet encountered. The book is thoroughly enjoyable even with its not always pleasant characters. The writing is really very nice.

He raised his head, frowning. Waking up to rain filled him with a sort of hopelessness, a feeling that here was a day to be got over and dismissed as quickly as possible, a day when all normal business ought to be postponed.

Outside the rain made a soft quiet noise, like the sound of time itself.

Food was one of those dependable pleasures, like smoking.

And boy is there a lot of smoking. It is just the way it was then.

The mystery is a good one, the characters strong, and Mr. Gently a pure joy. I really enjoyed Gently Does It, and have bought three more for the Kindle. Alan Hunter died in 2005, and over the years wrote 46 George Gently books.
Posted by Nan