Capable of Murder by Brian Kavanagh 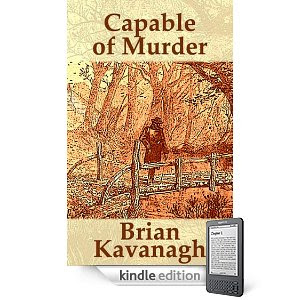 There is an excellent definition of just what a cozy mystery is here. Capable of Murder fits most of the criteria. I tend to shy away from cozies in general. Too often in my reading experience, the amateur sleuth is a woman who seems to be the modern equivalent of the old 'damsel in distress.' Belinda, the heroine of this book drove me crazy in the way she took chances and trusted people she didn't even know. I never understand why such women walk into situations that any normal thinking person would run a mile from.

Belinda Lawrence is a native Australian who moved to England several years ago. The book begins with Belinda reading a letter which just arrived from her Great-aunt Jane who lives in a small village outside of Bath.

Dear Belinda,
I would appreciate it if you would come down to the cottage this weekend. I have something of interest for you.
Yours, Jane Lawrence

Belinda hasn't visited her aunt except for when she first arrived in England. She didn't feel welcomed that first time and since then the two have communicated only through Christmas cards. So, this note intrigues Belinda, and she takes some time off work to go visit. On the train going down she has an encounter with a stranger, and he accidentally spills coffee on her. I thought her response was cruel and uncalled for:

And when he tries to remedy the mess, she says:

Stop that. You're making it worse. Why did you have to sit next to me, when you had the whole train to choose from?

Not the best introduction to a new heroine, is it? I thought her just as cranky as her relative presumably was. When she arrives at the cottage, she finds the garden untended and unwelcoming. A rat scurries past her. And the rain and thunder only add to the unsettling feeling Belinda has. She manages to make her way to the door, and after getting no response to her knocking and her calls to her aunt, she finds the door is unlocked. While she stands wondering whether to go in or not, a large bird lands in a nearby tree with its prey dripping blood down on the terrace stone. Quite a gothic scene for a cozy mystery. Belinda's quick temper is visible again when she says to herself that she wishes she had never come, 'while silently cursing her great-aunt.' She's angry because the woman invited her and then went away. This reader was thinking, maybe Great-aunt Jane just went out for some milk.

Well, of course she didn't go away and she wasn't doing an errand. Jane Lawrence is dead and has been for over a week. In this little village of only a few houses, no one had checked in on her in that time. The police surmise that she tripped on the stairs.

On her way home to London, Belinda notices that the date on the letter from her aunt is after Jane had died. And so the mystery begins. When she goes back for the funeral and meets with the lawyer she finds herself the beneficiary of quite an inheritance - a lot of money and the house. She moves in which I would never do.

It seemed to her that the light from the long room windows faded unnaturally into blackness so dense that the staircase vanished into a menacing and all-embracing emptiness.

I think there is an audience for this book, and this series. I've read some glowing reviews. But I'm not that audience. I couldn't seem to get over Belinda's personality and actions. I didn't care for the setting or the characters, though I did enjoy the historical connections with Capability Brown, the English landscape architect.

You may read more about the books here. Please don't be swayed too much by my response. As I noted, I am sure many people would thoroughly enjoy Capable of Murder, and would want to go on to the next books in the series.
Posted by Nan