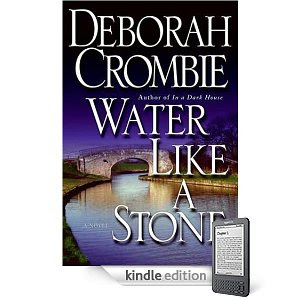 It is now another Christmas in the lives of Duncan Kincaid and Gemma James. It is a year after the events in And Justice There is None. They decide to spend the holiday at Duncan's childhood home in Cheshire. It is a beautiful, rural area but, as we mystery readers know, many a heinous crime may occur in the most lovely setting. In this case the remains of a baby are found walled up in an old barn. It just so happens that Duncan's sister, Juliet is the contractor working on turning this barn into a home. If the work hadn't been done, this body would never have been found. It is wrapped in a blanket that Juliet recognizes as the same vintage as when her own children, who are 14 and 10, were babies. The Detective Chief Inspector Babcock happens to be a childhood friend of Duncan's so he doesn't mind sharing information with him.

Duncan's family home is truly an idyllic and welcoming place.

The small entrance hall was a jumble of noise and movement, filled to bursting with adults, children, and dogs. One part of Gemma's brain registered the smell of baking mingled with fresh evergreens, while another took in the pale green walls hung with framed illustrations from children's books, an umbrella stand crammed full of brollies and walking sticks, and pegs draped with coats. Holly intertwined with gold ribbons and the deep red berries of yew wound up the stair rail.

Gemma feels very much at home, though this born-and-bred Londoner is not at all comfortable in the country with its darkness and strange night sounds. Juliet's son Sam is a delightful boy, while the daughter Lally is a troubled early teenager. We think her forays into drugs and drinking and smoking are due to the problems her parents are experiencing. Juliet used to be the bookkeeper for the investment firm owned by her husband and his partner. The partner has confessed that he and Juliet had an affair, and the furious husband has become enraged and violent in his words. But there is another side to this story which, when it comes out, changes everything.

Lally is also haunted by the drowning death of a young friend. This is the land of canals and canal boats, and the culture is a large focus of the book. We meet a woman and a family who live on their canal boats. She is fifty years old, separated from her husband, retired from her job as a social worker, and spends her life travelling the canals of Britain. The family has lived on the boats for generations, picking up jobs as they found them. She is rich, they are quite poor.

There are wonderful descriptions of these boats, the interior decoration, the lifestyle, and the canals themselves. There was a mention of:

... laceware china plates that the boaters had traditionally collected.

I found more about these plates online:

... called lace plates, because of the cut away effect of the edge looking a little like lace, or ribbon plates because of the ribbons that were usually threaded through the spaces for decorative effect. They were sold as fairly cheap souvenirs from the start of this century and were collected by boat people to cover the boatman's cabin walls. 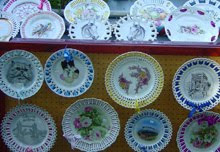 There is a very complete website which tells about all aspects of canal boats with many photos. It is a most appealing way of life. And it is also a vacation possibility. There's a wonderful newspaper article about doing this very thing. I have wanted rent one for a good many years, but I fear it shall not happen. But I may travel vicariously by reading some blogs. There is Narrowboat Journal. There is a blog entry called A Week on a Narrowboat. And there is Scraggs End. I'll tell you, they all set me dreaming. 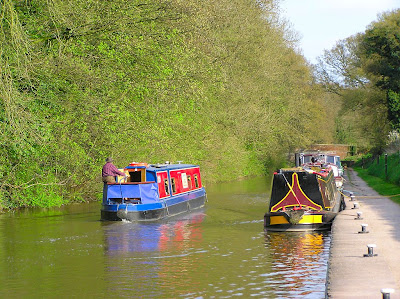 There are many stories going on in this book, and we wonder if they are connected at all with the death of this baby. Then suddenly and shockingly, there is a murder of someone Duncan has just gotten to know. Gemma gets involved in the case, as well as Duncan and begins working alongside the police. She can't help but feel that this person's death, on a canal path not far from the barn, may just be related to the long ago burial of the baby.

And as if all these stories aren't enough, the reader is also privy to the upsetting secret lives of the book's teenagers. Their parents don't have any idea of what they are doing, and we see that even the best of children may become involved in terrible situations.

This is an extraordinary book. Each of Crombie's books is far above simply a 'mystery' story. In addition to the geographical description, each one tells so much about human nature and motivation, and the world of its characters. For example, in Water Like a Stone we see how the underprivileged may be under-served by the very institutions that are supposed to help and support them, sometimes with dire consequences. We also see how fragile are the ties that bind. And as always we watch Duncan and Gemma grow and change as human beings trying to balance police work with their personal family life. Water Like a Stone is an excellent, excellent book, as is every single one in this series.
Posted by Nan