Howards End is on the Landing by Susan Hill 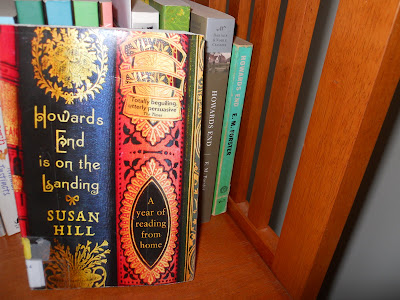 I've recently changed things around a bit in our rather newly painted study. I took out the La-Z-Boy and put it in the living room where it is so perfect for watching television, and I brought my favorite sitting chair into the study. Next to it is a reading lamp I bought at LL Bean. It is a great lamp because it swivels, and it moves up and down. 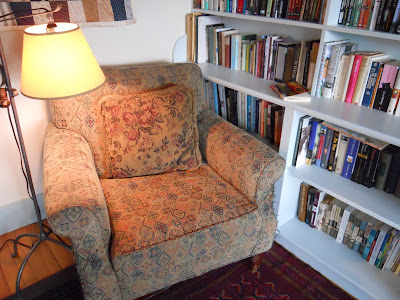 One evening, after I'd borrowed Howards End is on the Landing from the library, I sat down and read almost 90 pages. It was pure bliss. Reading about books, by a great writer and lover of reading, in a room full of books. Occasionally, I would look up at my own books and I felt such contentment. The next day and evening I finished the book.

Many people have written about this book. I wasn't sure I would like it, since I generally don't care for books about books. So often they are full of books I've never read, and don't want to read. Oh, but this one is sublime. I felt as if the author was in my own head and heart. There were passages that made me feel as if I were reading my own literature diary.

There are some in every room, on every shelf and bedside table, though the two main collections are kept together, the best in the alcoves beside the drawing-room fireplace, the rest next to Thomas Hardy in the Small Dark Den. That is 113 assorted books by or about Virginia Woolf, and a few on Bloomsbury in general, with a run of the sadly short-lived Charleston Magazine thrown in. Easy to remember where it all began but harder to explain why a youthful interest which accorded with my aspirations at the time should not only never have faded but have greatly increased over so many years. Where are such passions formed, not only for an author and their work but for everything surrounding them, their lives, family, friends, the places in which they lived, their psyches?

As anyone who reads these letters knows, I love Virginia Woolf beyond words. This love began when I was in my early twenties at Boston University. At that time, she was just beginning to get popular again. In a 1972 book called Recollections of Virginia Woolf, Joan Russell Noble says that not much has been written about Virginia Woolf. Doesn't that just seem unbelievable? Anyhow, I fell in love with her writing, her life and times. One day John Lehmann came to the college to talk about Virginia and Leonard, and his own work at the Hogarth Press. I thought I'd died and gone to heaven. And Susan Hill describes my feelings that day just perfectly.

I used to look at him [George Rylands, a 'sales rep' for the Hogarth Press], as I also looked at William Plomer, another friend of the Woolfs, in bemusement that here they were, chatting to me, and there they had once been, chatting to Virginia.

The chapter titles are all wonderful, and in one called Laughter in the Next Room she says,

Humour in books is a very personal thing and not a subject about which to be superior. I am always overjoyed when my recommendation of P.G. Wodehouse is successful. Only recently, when I recommended a friend start with The Mating Season, the next e-mail I got from him was headed 'What ho!' But it ain't always so. Another friend said he couldn't see the point of spending time with such silly asses. You can't convert someone like that, you just have to let it be.

Along with loving my two favorites, Woolf and Wodehouse, she also enjoys other writers who mean a lot to me, such as Gerald Durrell and Roald Dahl. In an excellent, and heartfelt review of this book, Eva noted that:

Quite early, I realised that Hill is a different type of reader than me; while I love to read diversely, she's quite insular. The vast majority of books she talks about are British and 'non-genre' at that; it goes without saying they are by white authors.

And I guess when I think seriously about my own reading, I'd have to say that is pretty much me. I was amazed to realize at quite a young age that my heart and soul lay over the ocean. I recently told another blogger that when Tom and I were in our twenties, we gathered information on moving to England, but ultimately could not put our animals through the six-month quarantine which was then required. I love my country, and its authors, but the Brits are the lifeblood of my reading life, from those already mentioned to Miss Read and E.M. Delafield and John Mortimer and E.M. Forster. You may have noticed that the photo of Howards End is on the Landing is placed next to my two copies of Howards End. And I have a Kindle version as well. It is one of my top favorite books of all time.

In another instance of recognition, Susan Hill expressed what I'm always going on and on about - the rise of issue books for young people.

Since our children's books were first bought, fiction for young readers has become more and more issue-led. Divorce, step-parents, drugs, alcohol, early sex, knife-crime, foster-care, child abuse, unemployment, gang warfare, AIDS, terminal illness ... you name it, there is a novel for children about it. But all children are anxious, adult life contains much that is ugly and unhappy, unpleasant or downright bad. Why introduce them to that too early, through books, which can be such a force for enjoyment, imaginative enrichment, fun, excitement, adventure, magic? Realism comes home soon enough and many children have too much anguish to cope with in their everyday lives as it is. Their books can be one corner of life that remains untainted by the troubles brought upon their heads by unthinking, unloving adults. I am glad mine remained ignorant of much that is polluted, cruel, ugly, hurtful, wrong as long as possible (which is not, after all, very long, in the scheme of things) and that their books were wholesome, enriching, enlivening, enjoyable, lovable and, for the most part, were about worlds into which they could happily, innocently escape.

And to that I say, 'amen,' as I do to the whole book. Susan Hill puts into words, over and over again my thoughts, my feelings, my love of certain books and authors. Of course, I'm not a fan of every single author she writes about, like Dickens, for example.

The cover is one of the most beautiful I've ever seen. It reminds me of the notecards and bookmarks I've seen of the shelves at the Bodleian Library. And, as you may guess, I've already ordered my own copy of Howards End is on the Landing.
Posted by Nan