Farm and Garden Report - May 27

My motto for May must surely be 'I can't keep up.' From gardening to housework to reading to making supper to writing my letters, I am constantly behind. A couple years ago, I offered a Christopher Morley quote:

That's exactly it, with just a change in month. May is when everything really happens around here. Almost minute to minute you can see the grass grow or a plant come into flower.

The first miracles in the garden are rhubarb and chives. 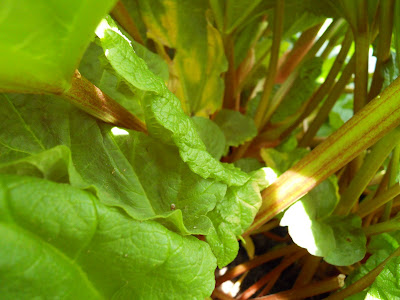 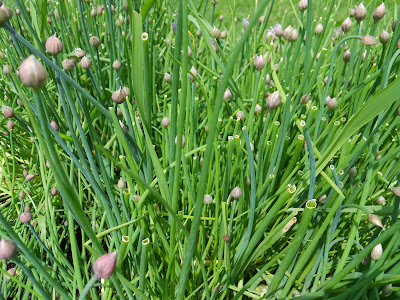 These workhorses come up year after year, providing food and beauty with no help from me at all. We've got four big plants of each, and we've had to divide them over the years because they outgrow their spaces. I use the chives at almost every supper, and the rhubarb often. I have frozen 9 cups of the latter, and honestly could probably freeze 99 cups! But there are just so many rhubarb desserts that we can eat in a year. I'm trying something different this year. The author of the recipe in Country Living which I posted said that she freezes her rhubarb with a little sugar. I've always just chopped it up and frozen it, so we'll see if the sugar addition makes any difference.

The early days of May were all about color at the bird feeders. After months of the winter visitors, clothed like their surroundings in browns, blacks, whites, and grays, suddenly three kinds of birds brought the bright colors of red, yellow, and blue in the form of purple finches [query: why are they called purple when they are so clearly red?], gold finches, and blue jays. And the mourning doves' orange feet! Have they always been that color and I've just never noticed?? We took down the feeders mid-month. Feeding had slowed considerably, and on the 16th Margaret looked out her window and saw a black bear ambling into her yard. We thought we'd better take away any incentive for showing up at our house. You may remember that I told you in the May 4 report that Tom saw a bear. Wonder if it is the same one? Just yesterday one crossed in front of us down on the main road. Ah, spring.

The first lawn mowing happened on Mother's Day evening. The light was so very beautiful and impossible to capture, just as is the lovely smell of fresh mown grass. Look for a lawn mowing related posting soon.

We've made a decision that we aren't going to build a patio off the kitchen, not this year and maybe not at all. We can't afford it in either time or money. We've just bought six new replacement windows for the study and the living room. We lose a lot of heat through those rattly old windows. 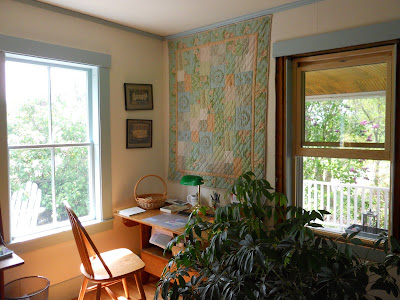 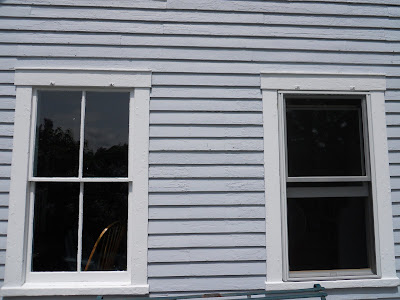 And we had to replace the porch roof. Remember that beautiful paint work Tom did in the study? Well, the ice built up on that old roof and we had terrible leaks in the porch ceiling and the water dripped right down into one window, and one wall, buckling the sheetrock. 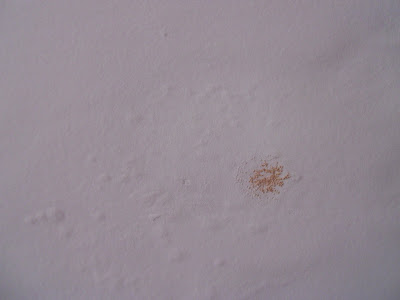 We got a cool slate blue metal roof! 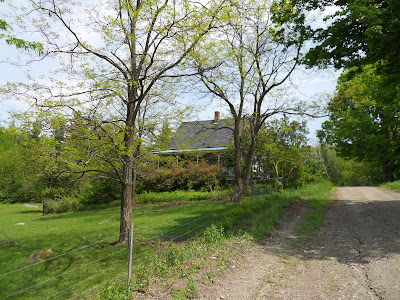 The cost wasn't bad because the man put it on right over the old roof. Maybe someday the whole house will be roofed in blue, but that is quite a ways off. The other thing we want to put time and money into this summer is painting our kitchen. That room has been looking sad for a lot of years now. Tom is almost finished with the butt'ry space but still must fix the window and door before they can be painted.

Heard the wood thrush on May 12, surely the sweetest bird song.

On May 16, 'our' rabbit appeared! We never see more than the one, but he or she usually shows up several times in the summer. We never have trouble with it in the veg garden. I think it greatly prefers the fresh green grass.

The bluebird couple are definitely back, about which we have mixed emotions. The male is that beautiful blue color, and they are spoken of as the 'bluebirds of happiness' after all, but you may recall the anguish and hassle they brought last spring. It's like a romantic comedy in the north pasture. This morning the bluebirds were on the wire, with nesting material in the female's mouth, and they were all shook up because just below them on the ground the male turkey was doing his love dance to two (!!) females. I opened the window to coax the turkeys to move along so the bluebirds could get back to their homebuilding. 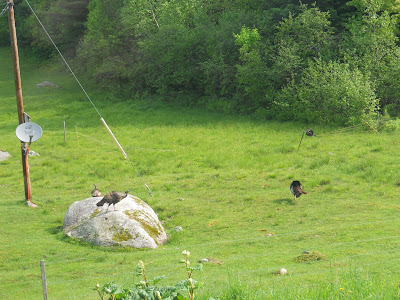 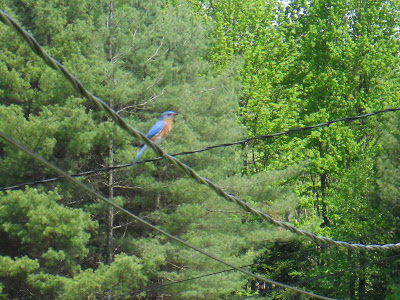 Not great shots, because they were through the window with the zoom on the little camera, but you get the idea. But look at this one! I think those are two males. Geez, does that mean we have two nesting pairs?? 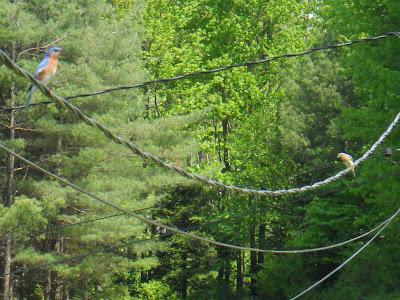 The robins are already nesting. I only see them occasionally when they come out to get food. No visible nests. I think a flicker is nesting in the old crabapple out back. I've heard a new bird I can't identify yet. A sparrow perhaps.

There are lilacs everywhere. 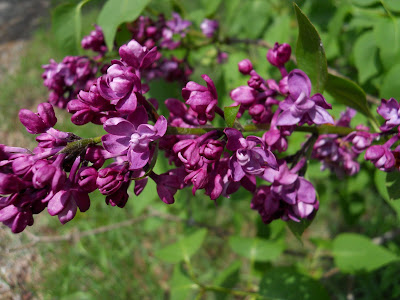 The early crabapples have come and gone and the later one is in bud. 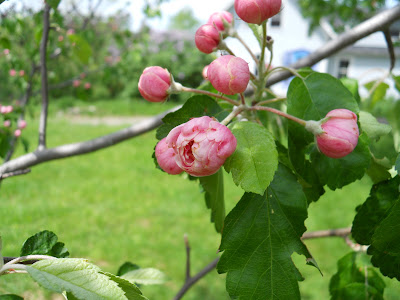 The honeysuckles - red, cream, and pink are full of bumblebees. This is the height of the year for fragrance. 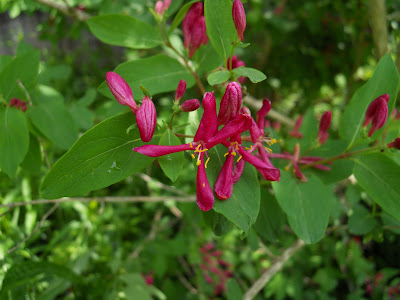 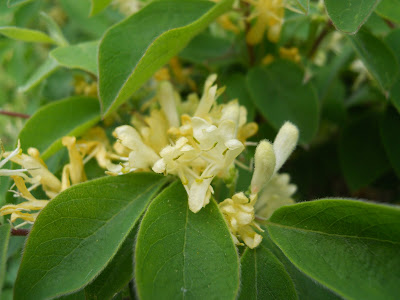 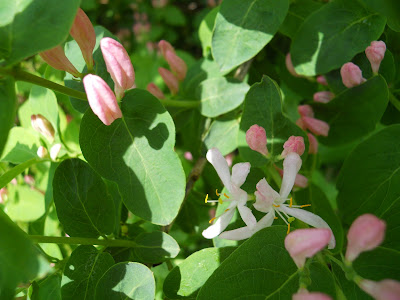 The lily-of-the-valley is still blooming beautifully, while the violets have started to fade.

After a year of not using cocoa mulch because our store didn't stock it, we're putting it on the flower gardens again. 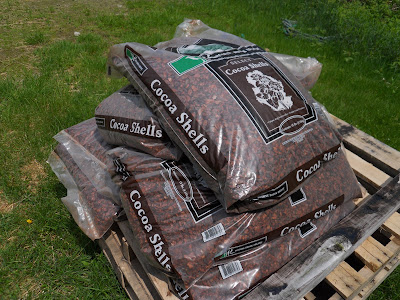 I really love this stuff. Of course the smell is quite appealing, but also it enriches the soil, and makes it easy to pull the weeds.

As this fleeting month of May comes to a close, I wish my US readers a happy Memorial Day weekend which we view as the true beginning of summer.

I'll close this report with a John Deere ad I just love.