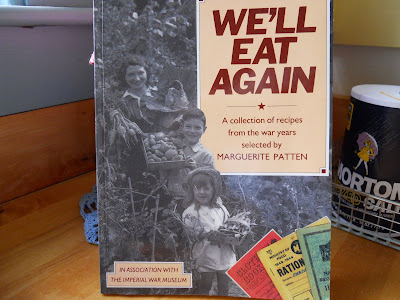 39. We'll Eat Again
A Collection of recipes from the war years selected by
Marguerite Patten
in association with The Imperial War Museum
nonfiction, 1985
sixth book for the Foodie's Reading Challenge
finished, 5/10/11


This book is an historical treasure. It offers not only recipes, but also photographs, slogans, cartoons, and cooking tips from the time of the Second World War in Britain. In the introduction by the director of The Imperial War Museum, Alan Borg, he writes:


This book is an exercise in nostalgia, but it is arguably more than that. The health of the nation was surprisingly good during the war years, despite the physical and emotional stresses so many had to endure. Infant mortality declined and the average age of death from natural causes increased. Part of the reason for this may have been the new eating patterns which were forced on the British public by the war. For many of the poorer sections of the community rationing introduced more protein and vitamins, while for others it involved a reduction in the consumption of meat, fats, eggs, and sugar.

Do we really have to be forced to eat what we know is good for us? It would seem so. There is no imposed limit on any food now, and people just go for it with gusto. 'All you can eat' meals at restaurants encourage just that. If you watch American television, you will have seen ads for various restaurant chains with food overflowing the plate. And that food is not vegetables or fruits. It consists mainly of meat, fish, and cheese, lots and lots of cheese. According to the USDA,

We don't seem to be able to use any self-restraint when it comes to eating, as is evidenced by the increased obesity all around us. During the war people all over the world were thinner, of necessity. This book is all about nourishing a person which is, in fact, the reason for eating. But sadly, there seem to be other reasons which have crept into our relationship with food. When someone is feeling low, they will eat a pint of ice cream. We feel we deserve food when we've had a bad day. And those commercials for restaurants are all about conviviality and make the viewer think, oh, I'll go out and eat and eat and I'll have laughing friends and sparkling conversations just like those people in the ads. And we get fatter.

I think a book like this could be a wonderful teaching tool for children. For example, once a week a family could choose a recipe from We'll Eat Again, and make it for one of the daily meals. I could see an ingenious classroom teacher bringing in the book, and having the cafeteria make a World War II lunch. Nothing makes history more real to kids than something concrete. When Tom teaches the Holocaust to his students, he brings in a German helmet and flag that my father brought home from the War, and they are very moved.

This is simply a marvelous book, and I was so very pleased to find out that the author is still alive. You may see a photo of her, and read a great article here. And there's another wonderful piece here. Women like her have so much to teach us.

Maureen gave me this book two years ago, and I am so very grateful to her. I was fascinated by all the information, and the recipes. There are several I will be trying, and the one I made today is so delicious that it will become one of my regular suppers. 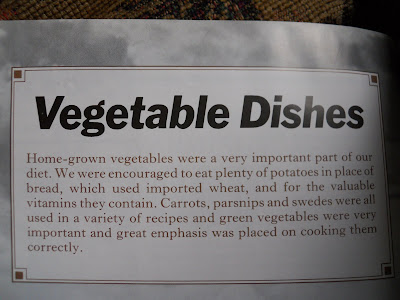 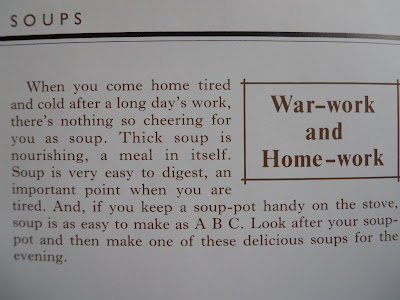 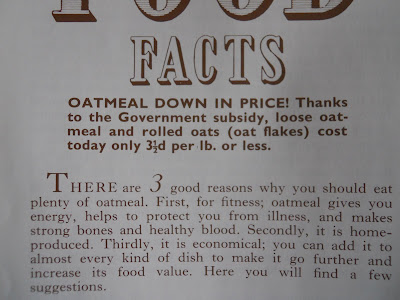 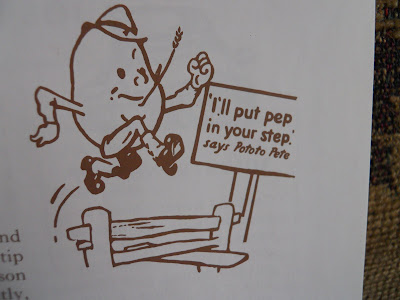 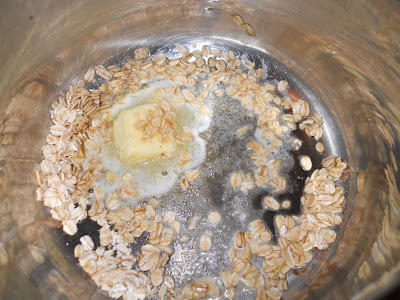 Blend with a little of 2 pints of water, then add the rest of the water and bring to a boil.
Add 3 potatoes, 4 carrots, 1/2 small swede, 1 leek if you have it, sliced or cut into cubes. 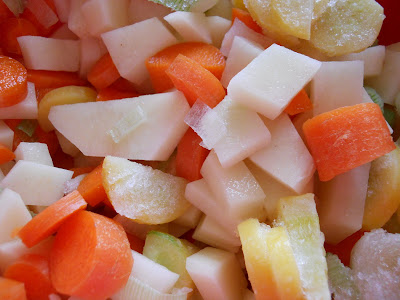 Cook for 1 hour.
Just before serving add pepper and salt and some chopped parsley.
The quantities given are sufficient for 4 helpings.

My notes: A swede is a rutabaga or turnip. I didn't have one so I used some summer squash from the freezer. I also didn't have any fresh parsley.
I didn't have margarine so used butter. 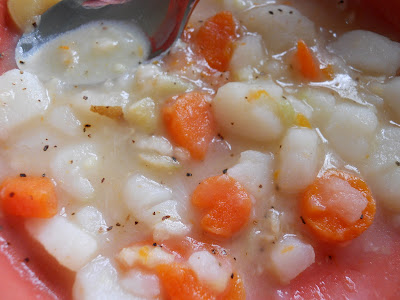 I'll tell you honestly, I didn't feel the least bit 'deprived' while eating this soup. It actually has more butter than I use when I make a soup and often I don't even use butter. Usually, I'll sauté some vegetables in olive oil before adding them to the soup. This was very rich tasting. I've never heard of 'frying' oats in butter, but it is a great idea. 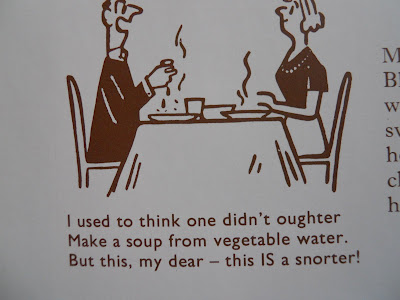