A late May evening at the movies - Of Gods and Men 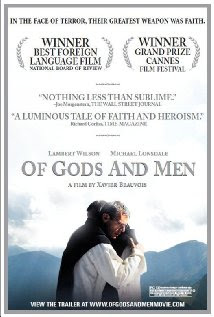 As I sat in the theatre last evening, I lost track of time and space and felt as if I were in a little Algerian village. Though there was poverty and illness, there was an almost idyllic quality of life. Christian monks, of the Order of the Cistercians, better known as Trappists, and Muslim people existed together in peace. Both groups participated in the market, the monks bringing honey from their bees. The Christian doctor ministered to his Muslim patients with great love and care. When there was a special Muslim occasion, the monks were all invited, and were clearly very moved by the ceremony. 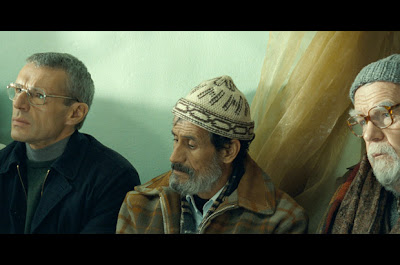 We see a young girl seeking innocent romantic advice from this old monk. She asks if he has been in love, and he said, yes, many times but it was sixty years ago, and then he found the greatest love of all.

There's a scene that is almost painful in its everyday normalcy where the monks' car has broken down and several Muslim women walking the road stop. They banter like old friends, and then go their separate ways.

The landscape is amazing. The town is full of steps connecting the different levels. There are wide empty spaces outside of town. In one scene we see two monks building a wall, and one of them just forgets the work as he stares off into the vast, beautiful countryside. I learned after the movie that it was filmed in Morocco, but my guess is that the feeling of the land is the same.

This film is based on a true story which occurred in the 1990s during the Algerian civil war. Suddenly, startlingly some people are brutally murdered. They were Croatian workers, killed in an anti-foreigner rampage. Now it is clear that the monks are in danger if they stay. They talk and pray about it. Do they leave their calling, or do they stay and risk death? This is the underlying question of the movie but the viewer almost forgets as the monks go about their quotidian routines.

This is not a fast-paced movie. The viewer becomes almost a participant in the monastic life. When the monks chant, the filmmaker shows the whole thing, not a little fragment. There is stillness as a monk loads wood onto a cart. We feel we are observers of something sacred and we are changed by our being amongst these quiet believers in this truly wonderful film.

Before I show you the trailer, I want to share some words of Mary Oliver which I read just this week.