A spring evening at the movies - Another Year

The season has begun at our small town independent theatre. It is a wonderful old place with wood floors and tin ceilings. As I've written before, Tom is the volunteer projectionist/ticket taker at the Wednesday evening half-price show.

In the brilliant Mike Leigh's newest film, Another Year, we meet Tom and Gerri Hepple, who have been together since their university days. The actors, Jim Broadbent and Ruth Sheen are so very perfect that you kind of forget they aren't the characters. 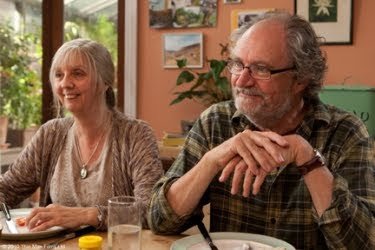 They live a quiet, gentle, enviably happy life. He is an engineering geologist - 'he digs holes' says Gerri, who is a counselor. They adore their son, played by Oliver Maltman, as he does them. Tom and Gerri let him live his own life without interference, and with humor. They are that rarity in films and books, a really happy, loving family. They are not extinct. In my rather small circle, I know many such families.

Yet, we all know people who are not so lucky. The saddest case in the Hepple's circle is Gerri's co-worker, Mary who is quite desperately lonely and cannot hide her loneliness even from strangers. She talks too much and drinks too much. She latches on where she shouldn't. She tries everyone's patience. Mary is played brilliantly by Lesley Manville. We feel sorry for her, while at the same time we can't stand her. Tom's childhood friend Ken, played by Peter Wight, is quite as troubled, though not as offensive. We can't help but worry about his physical health as he over drinks, smokes, and eats. He must continually wipe the sweat off his face during a meal. 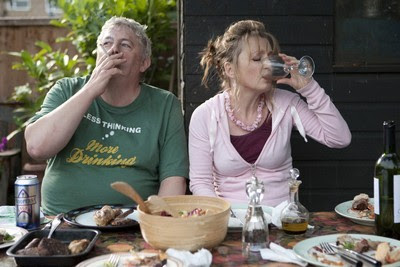 The film begins in spring and takes us through the year. Just 'another year' with all the ordinary, happy, and sad occurrences. We see Gerri and Tom working on their allotment. They are deeply contented there, growing their vegetables, tending the soil, enjoying the weather. 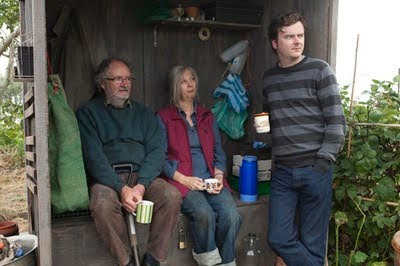 And their London place is wonderful, wonderful. There is a cozy, welcoming living room and a kitchen that isn't just a showplace. Tom and Gerri both like to cook, and you see 'stuff' all over the counters, just like in real life. Don't you get sick of the sterile, every-one-looks-the-same kitchens in the magazines? Well, I do. Their kitchen is a kitchen that is full of love -the love between the couple and their love of food. 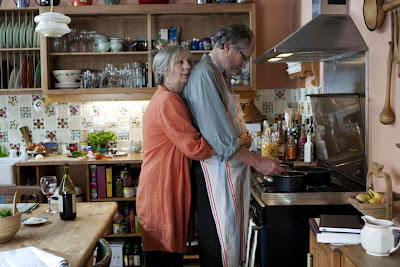 And the backyard is what we dream of. It is lush and beautiful, with sitting areas, a tree house, a swing. 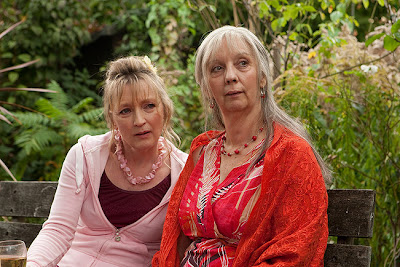 Each season brings encounters with family and friends; some we meet just once while others we see more often. There is love and loss. The people who are sad don't magically become happy. But those who are happy don't become sad either. Around the internet I've seen some great descriptions of this film. The Daily Mail says,

It's love, actually, for Tom and Gerri as Mike Leigh does The Good Life

Another Year is a mature ode to joy

There is a review here which I just love. And one from Roger Ebert.

You may visit the official site for a trailer, and more information.

Not everyone loves the film. I have read of some resentment against the couple; that they are too good to be true, and are condescending toward their friends. I don't buy it. I think they are very real. It isn't fashionable to be content. In another film, Tom would have cheated on his wife. In fact, I was waiting for it. Waiting for a flirtatious gesture, a touch that did not happen. There is no jealousy between the husband and wife because there is no need for it. Mary is sort of a friend, but I thought she was more of an acquaintance that Tom and Gerri must put up with a few times a year. And Ken is a friend from 40 years ago, which doesn't necessarily mean the men have much in common these days. I thought Tom and Gerri did their best for these sad souls, without letting them overcome their own joy in life. Mostly Tom and Gerri are the unit, the friends. They are happy together. Their great joy aside from their marriage comes from their son, and the new girlfriend he brings to the house. Katie is a great character by the way, with a humorous outlook on life. She is played by Karina Fernandez, and you can just see the laughter in her eyes. 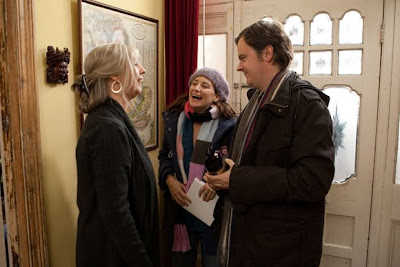 And this isn't one of those families who are the unit and anyone who comes in is an outsider. She is immediately accepted both for who she is, and for the joy she is bringing to Joe.

Every minute of this film felt real. The people look real. They don't have face lifts and eye repair and dyed hair. We see the characters as they are - most of them people around 60 years old. This is how we look, kids. I am so, so tired of seeing people doing everything they can to not look their ages. But you know what? We all can tell. We know how old someone is. I greatly prefer seeing the authentic person, with sagging face and gray hair. Gerri speaks of herself once as having 'middle-age spread' and her dear husband jumps right in saying how beautiful she is. And she is. She wears clothes that suit her just perfectly. I think it would be much better for young people to see older ones as they really are. It doesn't do any of us a bit of good to try and hide aging. It makes kids think that aging is a bad thing, and it makes the older ones look plain silly. When I was a girl, I looked up to older people. Maybe if we who are now older behaved in an age-appropriate way, and looked age-appropriate perhaps younger ones would look up to us, instead of seeing people who glorify youth so much they spend money to look younger. Did your grammy seem less appealing to you because she had wrinkles and a big belly? I think not. I think she was comfortable to be with. When we are young we see through the eyes of love.

There's a great scene where Ken is bemoaning that the pubs are full of loud young people, while Tom reminds him that he used to be one. And that's the way life goes. We aren't the same at 60 as we were at 20. And I say, thank goodness. As does Mike Leigh in this marvelous, excellent film, which just may be the best one I've ever seen.
Posted by Nan