Where Memories Lie by Deborah Crombie 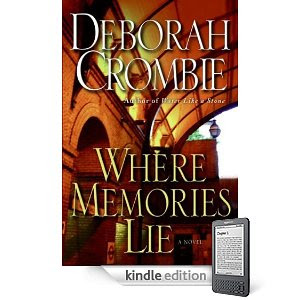 
Kincaid and James are back in London, and it is a few months after the events in Water Like a Stone. Erika Rosenthal, whom we met in A Finer End when she helped with the case, now has a problem and needs Gemma's help. A brooch which her father, a famous jeweler in pre-Nazi Germany, made, and which Erika hasn't seen since she left in the nineteen thirties, is up for auction. She wants to know who offered it to the auction house. Gemma makes an informal visit to 'Harrowby's', and shortly thereafter a young woman she spoke with is found dead, the victim of a hit-and-run driver. When another person is killed in the same way, we know there is a connection.We see how very difficult it is for the police when death after death occurs, and when the victims knew one another, and especially when someone thought to be a suspect also turns up dead.

Where Memories Lie reminds the reader of an important truth which we all too often forget. At one time or another in our lives we have all been guilty of judging an older person on how they are at this minute. We forget that they were young once. A sedate older woman may have had a wild youth. A gentle older man may have suffered the loss of a child. We must always remember that everyone may have had trouble and also great joy in earlier times.

As well as occurences in the present day, we meet a policeman from 1952, and find out over time that he is connected to today's crimes, and most importantly to one of the characters. I just love this in Crombie's work - the way the past and present seamlessly intertwine. The chapter headings are so important to this book, as they are in each one in the series.

The United Kingdom was the first refuge for perhaps half the 2,200 refugee scholars who had emigrated from Germany in 1938.
- Louise London, Whitehall and the Jews, 1933-1948

Even though the Allies were fighting a war against Nazi Germany, whose anti-Semitism was a central plank of its public policy, anti-Semitism did not suddenly disappear from Britain during the war, but persisted and even increased.
- Pamela Shatzkes, Holocaust and Rescue: Impotent or Indifferent? Anglo-Jewry, 1938-1945

December 1940
Monday, 9th
Last night was very bad indeed. Began soon after 5:30 pm.... I had to run from my place to the Sanctuary as the barrage was working up. It never ceased until 2:30 am. Many bombs came down ... some in our district. On enquiry today I find it was around the Sion Convent, Chepstow Villas and Dawson Place... people buried.
- Vere Hodgson, Few Eggs and No Oranges: The Diaries of Vere Hodgson, 1940-1945

I found this book to be very moving. Each character is particularly vivid. There are kindly souls and monsters; there is great love and great hatred. We see Kit, a young boy I haven't mentioned before because I haven't wanted to give anything away in terms of story development, displaying great empathy and even a bit of detective skill.

I do go on and on with each book report I write on this series, but I am completely in awe of Crombie's great ability to combine a good mystery story with an incredible sense of place, history, and character.
Posted by Nan