Necessary As Blood by Deborah Crombie 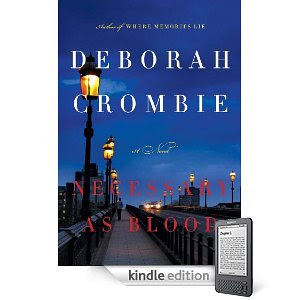 The book begins in such a beautiful way. A textile artist and her young daughter are in the top-of-the-house space where the mother does her work. When a disparate note crept into the description I had to stop and read it again, thinking I had read it wrong. But no. This troubling hint comes back much later in the book.

The further I read in Necessary as Blood, the more I felt this is partially a story of the challenges parents face who work outside the house. I'll try not to give too much away, but here in the thirteenth book in the series, Gemma James has a family and a home. Yet she is seldom there. We have seen in other books that her partner can't pay attention to all the details of home either. In addition to the pulls between work and home, her mother is very ill and Gemma gets so wrapped up in her work that she doesn't visit that often. Maybe that's why we mystery readers see so many people in this job who are solitary like Erlendur in the Arnaldur Indridason books. Maybe they do drink too much, and eat bad food, and have rather small lives outside of work, but perhaps this is what makes them great investigators. I certainly couldn't do this work if I had a husband and kids at home. Every missing child case would make me fearful about my own kids.

If you are watching The Killing on television, you know that the main detective is a single mother who can't even find time to move away and get married because of a murder investigation. Her son is suffering, and actually does something very bad involving photos from the case which he got off his mother's computer. The fact is that it is very, very difficult to raise a family and have a relationship when you are a police detective.

Deborah Crombie does such a great job of covering all the facets of her detectives' lives, with different aspects covered in each book. One may deal with friends, another with family or love or childhood. And these personal details are all interwoven with the current crime which is being investigated. So, while the books may be read out of order, there is a depth which comes from reading them as they were published. What we learn in one book carries over into a later one, just as in our real lives.

The setting here is the East End of London, and the changes in population and economics over the years. Early on the French Huguenots came to Spitalfields to 'escape persecution in Catholic France.'

New waves of immigrants had followed the Huguenots - the Jews, the Irish, the Bangladeshis, the Somalis - but none had prospered as the Huguenots had done, and the houses had sunk into a long, slow decay.
Until now. Despite the recession, the City was moving relentlessly eastwards, encroaching on Spitalfields, bringing a new wave of immigrants. But these were yuppies with fat pocketbooks who were snapping up the houses and warehouses of the old East End, pushing the lower-income residents out as they came in.

These books are rich with details about the ongoing characters and the situations and locales they find themselves in. Necessary As Blood has a particularly satisfying ending. This will be my last Deborah Crombie book for a while, since the new one doesn't come out until August in the UK and February in the US. It's been such fun reading one right after the other for a while. I'll miss being in the company of Duncan Kincaid and Gemma James.
Posted by Nan