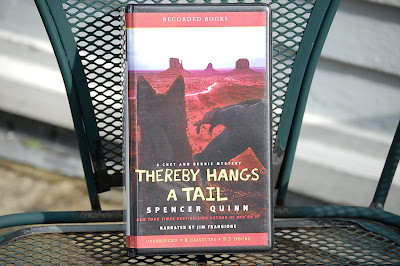 
Several years ago there was a phrase going around - 'may I be the kind of person my dog thinks I am.' Trite perhaps, but true nonetheless. Our dogs, Ben and Sadie, do indeed view us as perfectly wonderful, just the way Chet thinks of Bernie. The reader is all too aware of Bernie's shortcomings. He drinks too much sometimes, he smokes, he falls for schemes and repeatedly pawns precious items to raise money. Of course we learn these things through Chet's words because he is the narrator after all, but while he notes them, he never criticizes or judges or tries to change his beloved human friend. No wonder we love our dogs so much! Chet, in fact hopes Bernie never quits smoking because he loves the smell of smoke and the smoke rings which Bernie makes.

It is really the most marvelous and refreshing way to present a story, through the eyes of a dog. Chet forgets things. He doesn't have a sense of time. He doesn't understand so many human expressions. He loves to eat. He is a real dog in every way and not a cutesy character. Spencer Quinn knows dogs. He really does.

So now Chet has become a part of chez hill farm. Occasionally I'll call Ben, 'our Chet' when he does something particularly Chet-like. I go on and on to Tom about Chet's words and activities. Ah, the power of reading.

It was a pure delight to listen to the second in this series. Jim Frangione was really quite wonderful in his interpretation. I believe the mystery was even better than in the first book, Dog On It which I wrote about here. Bernie and Chet have to find a dog-napped little show dog named Princess. Though she is one of those lap dogs who is quite pampered by her owner, once she and Chet are off on an adventure together, she shows that she is a regular dog who is a real trooper.

Again, the Southwest is so well described. Though I've never been there, I can see it through Quinn's words. As in the first book, Bernie's concerns for his beloved state are expressed. He worries about the aquifer [a body of permeable rock that can contain or transmit groundwater], and the fact that a million more people are expected to move to Arizona in the next ten years. (Can this be true? Could I be remembering wrong?) The desert is both appealing and scary at the same time. It is a completely different landscape from anything I am used to, such as this butte: 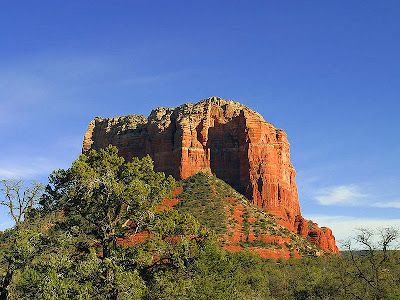 And this ghost town:


There is a cast of characters in the book from old hippies who live a nomadic lifestyle in the desert to an unsavory sheriff. Bernie's girlfriend disappears along with the owner of Princess. My only complaint about this particular book is that Chet has a biopsy. Now, we all know in our hearts that he will be fine, but why include it? I headed over to Chet the Dog and was assured by the great posters there that yes, he is okay. But again, why bother to put it in?

Other than that tiny quibble, I love this book and this series. I'm so looking forward to the new one, To Fetch A Thief, coming next month. Four paws up!

Oh, and in case you've read any of the Peter Abrahams YA mysteries, he is the author of the Chet and Bernie books, using the pseudonym of Spencer Quinn. There's more about him here.
Posted by Nan