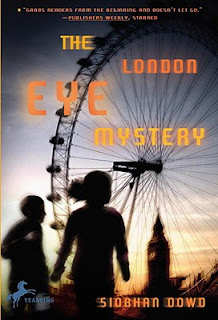 
One day I stopped in our local bookstore and began browsing through the juvenile section; for 9-12 year olds as they say on the book covers. I found two very appealing books by the same author, Siobhan Dowd. I bought them, and came home to look her up on the internet. I was so saddened to read she had died three years ago at the young age of 47.

Siobhan Dowd, the author of The London Eye Mystery, intended for the book to be the first in a series of adventures featuring Ted and Kat, the story’s main characters. Each mystery would be set in, or around, a famous building or landmark, somewhere in the world.
Sadly, Siobhan died before she was able to write any of the follow-up adventures, and The London Eye Mystery remains the only story featuring our intrepid amateur detectives.

The narrator of the book is a twelve year old boy named Ted. He tells us early on: 'my brain runs on a different operating system from other people's. I see things they don't and sometimes they see things I don't.' He has Asperger Syndrome, and his particular abilities enable him to solve a mystery.

Ted, his older sister Kat, and their parents live in London. The book begins with a visit from his mother's sister Gloria and her son Salim. The sisters are somewhat estranged, but Gloria wanted to stop by for a couple nights before her move from Manchester to New York City. Although his mother wants to go to the Tate Modern - 'Please not another art gallery' cries Salim - they all finally agree with Salim's choice, a ride on The London Eye. Ted describes it thus:

My favorite thing to do in London is to fly the Eye.

On a clear day you can see for twenty-five miles in all directions because you are in the largest observation wheel ever built. You are sealed into one of the thirty-two capsules with the strangers who were next to you in the queue, and when they close the doors, the sound of the city is cut off. You begin to rise. The capsules are made of glass and steel and are hung from the rim of the wheel. As the wheel turns, the capsules use the force of gravity to stay upright. It takes thirty minutes to go a full circle.

The best thing to see from up there is the river Thames. You can see how it loops and curves but when you are on the ground you think it is straight.

The next best thing is to look at the spokes and metallic hawsers of the Eye itself. You are looking at the only cantilevered structure of its kind on earth. It is designed like a giant bicycle wheel in the sky, supported by a massive A-frame. 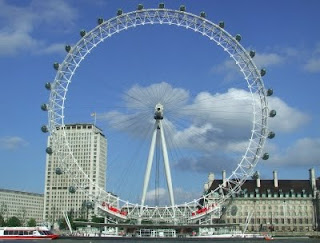 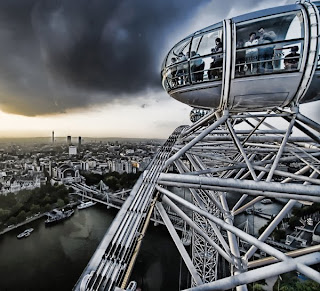 This passage, right at the beginning of the book tells us about the Eye, but also shows us Ted's own eye for detail, and the way his mind works. He is a genius in terms of knowing about the Eye, yet also notes the 'strangers.' All through the book the author shows us these two sides of the syndrome. Ted doesn't read emotional signals very well, and has just one friend, a teacher, outside of the family. And yet he has this great facility; an 'eye' that the rest of the characters can't begin to imagine. Ted loves weather and would like to be a meterologist someday.

I often don't sleep at night. My brain is filled with all the strange facts about the world. I switch on my reading lamp and listen to the shipping forecasts on the radio at low volume. I get out my weather books. I study the charts of isobars and isotherms. I examine photographs of what the weather leaves behind: dried-up lakes, wrecked shanty towns, mud-slides, people rowing boats around the roofs of their houses. And I plan how when I grow up I will help people prepare for the disasters and save their lives and their money and advise governments on how to manage the weather.

Of course, being a fan of the television series, As Time Goes By, I thought of the character of Mrs. Bale who makes occasional appearances in my Letters. She pays attention to the shipping forecasts as well. And I got to thinking she may have a type of Asperger's herself. She is a bit like Ted. Particular, intelligent, but not especially 'chummy' in her personal dealings with others.

The mothers sit in a nearby café while the three children stand in line to buy tickets for the Eye. A stranger comes along offering a free ticket because he is 'claustrophobic.' They all know they shouldn't accept anything from strangers but Kat, as the oldest, decides that Salim should take it and go up alone since the queue is so long she fears none of them will be able to go otherwise. Ted and Kat watch his 'pod' as he goes around but when the ride is over, Salim does not get off. He has completely disappeared. This is impossible and yet he is gone. Toward the end of a ride, a souvenir photograph is taken of each group, and when they look at the picture, Salim isn't in it.

As a mother, I found this unbearably frightening. I was reminded of the one time my own child disappeared, and in that very city. We were looking at the Egyptian mummies in the British Museum when suddenly almost ten-year old Margaret was not there. I can still feel the dryness in my throat and the pounding of my heart. The room was full of people. We couldn't see her. And then of course, there she was, but the memory has never left me. These very feelings can cloud our thoughts. Ted doesn't have them. He is able to concentrate on all the facts.

I adored this book. I thought the family members were presented honestly. Their relationship with Ted is very real. His sister gets exasperated with him and criticizes him, yet they join forces to find out what really happened. They make lists. They sneak out of the house to search for clues. We learn a lot about how Ted thinks yet because of the excellent writing, we don't focus on his situation exclusively. Often we see him as simply a character with a great gift, which is how I personally view him. Because this is such a newly recognized condition people are beginning to look back at geniuses in different fields in a new way. There is mention in this book that perhaps Andy Warhol and Albert Einstein had it. And I've read that some look at Asperger Syndrome as a difference, rather than a disability. The London Eye Mystery supports this way of thinking. Before Salim disappears the boys talk about being different in their own ways. Salim has been taunted with racial epithets at his school.

My Summer 2009 issue of Old-Time Detection magazine (not online; only available as a print publication) has a piece on 'Favourite Impossible Crime Novels' and this book makes the list. Robert Adey writes:

Another entry written for the teenage market and one which I found to be both charming and clever. The hero, as such, is an autistic boy who with his older sister (and you can imagine the relationship there) does the detecting when their companion, seen to get onto the London Eye, fails to get off it. I have also read Mark Haddon's 2003 best-seller, The Curious Incident of the Dog in the Night-time, a crime novel written from the perspective of an autistic boy, and preferred this one.

You may guess that I didn't read the Haddon book. I couldn't get past the murder of a dog. However, I can highly recommend The London Eye Mystery. Please don't be put off thinking it is a book for kids. It is well-written. It is an exciting and absorbing mystery. It is fascinating being inside Ted's mind. The characters are well-drawn, and the reader gets to enjoy a little bit of London life.
Posted by Nan