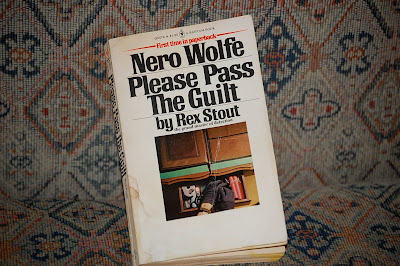 
This is only my second writing about a Rex Stout mystery. The first was a book report on A Right to Die. Most of my reading of the Nero Wolfe/Archie Goodwin mysteries happened before I began this blog. I've actually read more than I can count. I am unendingly fascinated by these two and what is currently going on in their lives. I don't really care that much about the mysteries, but I do care about these characters. They are to my mind the most intelligent of all sleuths.

I picked up this book in a used bookshop a while ago, and didn't realize it is the second to last that Stout wrote. I've never read the last one. I've heard about its darkness, and I fear something happens which I wouldn't be able to forget and which would taint my love of the series. From The Thrilling Detective:

A few don't end quite so well, particularly Stout's last Nero Wolfe novel, A Family Affair. Written at the height of the Watergate scandal, it's probably the darkest of the Wolfe stories; Stout, a deeply patriotic man who often subtly worked his concerns about American life into his mystery plots, seems to have been writing under a cloud of anger and frustration at the corruption revealed in the Nixon administration. His death soon after left the book a sour and unexpected ending to his best creation.

The books are narrated by Archie, and he describes the old brownstone on West Thirty-Fifth Street in such detail, I feel as if I've been there. The red chair, the yellow chairs, the desk, the globe, the kitchen, and those books! There is a list of all the titles in Wolfe's library that fans have collected from reading the mysteries.

And if you do visit that page, it has one of my favorite quotes, which I wrote in my own quote book in March 2002 from the 1959 book, Plot It Yourself. Archie is speaking:

I divide the books Nero Wolfe reads into four grades: A, B, C, and D. If, when he comes down to the office from the plant rooms at six o'clock, he picks up his current book and opens to his place before he rings for beer, and if his place was marked with a thin strip of gold, five inches long and an inch wide, which was presented to him some years ago by a grateful client, the book is an A.

If he picks up the book before he rings, but his place was marked with a piece of paper, it is a B.

If he rings and then picks up the book, and he had dog-eared a page to mark his place, it is a C.

If he waits until Fritz has brought the beer and he has poured to pick up the book, and his place was dog-eared, it's a D.

I haven't kept score, but I would say that of the two hundred or so books he reads in a year not more than five or six get an A.

It is features like this which make each and every book a pleasure to read. I've mentioned that my holy trinity of writers is P.G. Wodehouse, John Mortimer, and Rex Stout. A great joy to me is that Stout and Wodehouse read one another.

Here are some details from Please Pass the Guilt:

Of course Wolfe, up in the plant rooms on the roof for his morning session with the orchids, hadn't seen her.

Most of the people who enter that office for the first time have something eating them, but even so they often notice one or more of the objects in view - the fourteen-by-twenty-six Keraghan rug or the three-foot globe or the floral display in the vase on Wolfe's desk.

Cass R. Abbott rated the red leather chair on two counts: he was the president of CAN, and, being close to seventy, he had seniority. So I put him there. For the others I had placed two rows of yellow chairs facing Wolfe's desk. I have a sort of rule that when there is company and one of them is, or is supposed to be, a murderer, the place for him or her is the front row next to me...

Archie is a great walker, keeping him trim as he eats the same great meals, which Fritz the chef prepares, as Wolfe. Archie goes out dancing, he goes to baseball games, he drinks milk more often than liquor, and in his own way is as much of a genius as Nero Wolfe. He can quote long interviews with clients verbatim. He is very observant.

Wolfe sits in his chair, takes the elevator up to the plant rooms, and sleeps. He loves his thousands of orchid plants, he loves his books, and he loves his food. Probably now he would be labeled an agoraphobe, but he actually does leave the brownstone more often than we readers suppose. He would also probably be labeled an obsessive-compulsive. And he would be criticized for eating (and maybe drinking - he is a big fan of beer) too much. However, all these facets of his personality are what make him an excellent detective, a superior thinker, and a fascinating character. We love him even as we see what a curmudgeon he can be. He isn't bland. He isn't boring. He is one of the greatest literary creations ever.

Oh, and the plot of this book: well, when a businessman opens a drawer, a bomb goes off and kills him. Besides the question of who placed it there, there is the problem of whom the bomb was intended for. The desk didn't belong to the man who was killed. He merely opened the drawer. There are professional and personal intrigues which must be sorted out before the murderer is discovered. It's a fine mystery, but as I say, it really isn't of prime importance, though I should note that the mystery in each book is finely crafted and cleverly solved.

In the very first book in the series, Fer-De-Lance, published in 1934, Nero Wolfe says:

Compose yourself, Archie. Why taunt me? Why upbraid me? I am merely a genius, not a god.