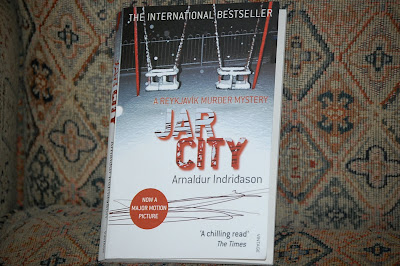 
If you've read my letters for a while, you may have picked up two things about me. One is that I am not a particularly fast reader. I seem to stay steady at four-six books per month depending on kind and length of book. And two is that I tend to shy away from disturbing subject matter. Well, as they say, rules are meant to be broken. I couldn't put this book down. I began on a snowy Friday afternoon, and finished just after midnight on Saturday morning, with breaks for supper and watching The Beiderbecke Tapes (which I love). And the book is full of all sorts of incidents, descriptions, horrors that I usually cannot read. I thought it was excellent despite a number of quite appalling situations.

The story begins with three incidents: the murder of a man in his late sixties, an assault on elderly twin sisters, and the disappearance of a new bride from her wedding reception. Are they connected in any way? Incidents from forty years ago come into play.

Inspector Erlendur Sveinsson is around fifty years old, divorced, eats poorly, and has troubles with his family. His son has been in rehab several times, and his daughter is an addict. He blames himself because he left the family home when she was very little. But the way she speaks to him! She makes Major Pettigrew's son seem angelic in comparison. :<) The writing, and the translation, are simply excellent. It reminded me a bit of Hemingway.

He took his meal out of the microwave and sat at the kitchen table. It was a one-bedroom flat filled with books wherever there was any room to arrange them. Old family photographs hung on the walls showing his relatives in the East Fjords, where he was born. He had no photographs of himself or of his children. A battered old Nordmende television stood against one wall with an even more battered armchair in front of it. Erlendur kept the flat reasonably tidy with a minimum of cleaning.

A movie has been made but isn't yet available in the US. I have it in the saved section in my Netflix queue. I can imagine this story would make a fantastic movie. My only acquaintance with Iceland previous to this book was the film, The Girl in the Café with the always excellent Bill Nighy, and a favorite actress, Kelly MacDonald. It made Iceland look so very appealing to me.

The author has a note at the beginning about Icelandic names which is fascinating, and there are great maps at the front of the book which were very helpful. The country, the names are all so new to me, and I so enjoyed my time in Iceland. The minute I finished Jar City, I ordered the next two in the series from The Book Depository. That's the highest praise I can give a series. I can't wait to continue, and I even might read this one again because it was so, so good. There's an interview from four years ago with Arnaldur Indridason here.
Posted by Nan