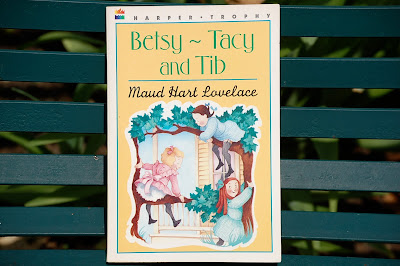 When I was a girl, the phrase, 'two's company and three's a crowd' was often said. Betsy~Tacy and Tib begins:

Betsy and Tacy and Tib were three little girls who were friends. They never quarreled.

Betsy and Tacy were friends first. They were good friends, and they never quarreled. When Tib moved into that neighborhood, and the three of them started playing together, grown-up people said:

"It's too bad! Betsy Ray and Tacy Kelly always played so nicely, Two little girls often do play nicely, but just let a third one come around...." And they stopped, and their silence sounded as though they were saying: "then the trouble begins!"

But although many people expected it, no trouble began with Betsy, Tacy and Tib. The three of them didn't quarrel, any more than the two of them had.

As I finished my second in the Betsy~Tacy series, I realized that my book reports through the coming months on these books won't vary much. These are sweet books; they are pleasant books. They make the reader feel good about the world.

In this book, the girls are eight years old, and able to do more things than when they were younger. They get into very gentle mischief. One delightful instance is when Mrs. Ray lets Betsy and her friends 'keep house' after school until she gets home at 'half-past five.' She has left them cocoa and cupcakes so that they 'may have a little party.' Well, as you might imagine, they make their own party. Betsy suggests they make a dish called, 'everything' because 'it's got everything in it.' Haven't we all had this idea back in our childhood days? A few of the ingredients they mix together are:
bacon grease, ginger, milk, tapioca, coffee, molasses, and bay leaves. They end up throwing it out after tasting, and then clean up the whole kitchen.

Little incidents such as this may not make for exciting reading to some, but I greatly enjoyed the book, and I had a smile on my face as I read. I adore these books as much as I did when I was a girl reading them, and when I read them to my own daughter.

This is my fourth book in the You've Got Mail Reading Challenge. The others are listed on the sidebar and you may click the titles if you'd like to read my book reports.

I just recently watched You've Got Mail for the umpteeth (isn't that a fun word?!) time, and took note of Kathleen Kelly, played by Meg Ryan, telling Annabel about Betsy~Tacy and Tib, 'whose real name, I'm sorry to tell you, is Thelma.'

A wonderful movie, and a wonderful set of books. I highly recommend them for you or for the young girls in your life.
Posted by Nan