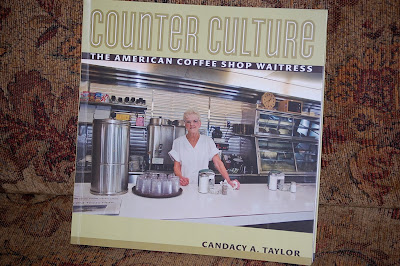 I've always told my children that waitresses and people who clerk at grocery stores and people at the front desks of businesses have very important jobs. They can make the difference in someone's day. When I was a new mother there were days when the only people I talked to were in the grocery store. I still remember the kindness, the genuine interest in my new baby from South Korea, the tales of their own children. They gave me a great gift when I was feeling insecure in my new job. They warmed my heart with their affection toward my girl.

Long before kids, Tom and I used to go to a diner in a nearby town. When Margaret came along, this was her first restaurant. A waitress waited on us, whom we had known for a while. She was originally from Japan. She grinned and told us the baby looked more like her than us. I still laugh when I think of it. Another waitress in the same place somehow got on the subject of high school poetry, and before we knew it, she was reciting the whole of Jabberwocky by Lewis Carroll. And later when our son went to school in that town and we would meet him and his girlfriend at the same diner, 'our' waitress knew what we always ordered. These are just three little incidents but in their way, they exemplify all diner waitresses everywhere.

I think these women are heroines. I think they are noble. I think they provide a much needed, and often unacknowledged, job in this world. They listen. They care. They give solace to the lonely. They bring humor and conversation to the sad. And Counter Culture celebrates these women. These women aren't called 'servers.' And they are never men. This is a realm when women rule. They may not be the owners, they may not get paid CEO wages, but the diner is theirs in so many ways.

Counter Culture is full of photographs and stories. Candacy A. Taylor does a wonderful job of writing about the general, leading into the specific. She'll tell about a facet of the job and then illustrate it with the words of a waitress. There are also profiles of individual waitresses. 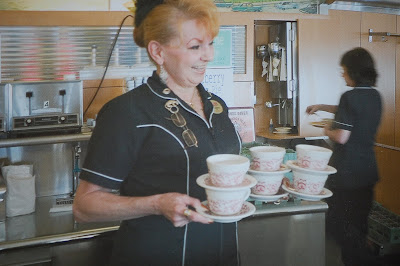 Carrying is her lifeline. The fewer trips she makes, the faster she can turn her tables, the more money she earns. Experienced waitresses can carry four to six cups of coffee at a time. Geri Spinelli, who works at the Melrose Diner in Philadelphia, said, "It's easy. You just pile one cup on top of the other. But you have to work in a place that still uses saucers so that they fit together." 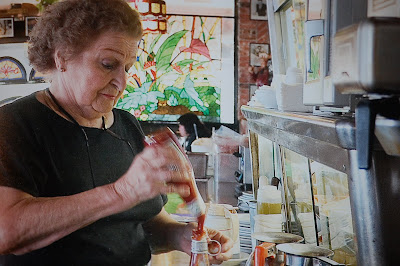 One customer who comes to me knows that he'll get fresh coffee. Some waitresses will make several pots at a time. They don't care if the coffee sits there for hours and gets stale. Or they will mix old coffee with a fresh pot. I tell the other waitresses, 'Don't touch my coffee pot.' I have a regular who comes in everyday at 5 am and he drinks decaf, so I don't make any decaf until right before he comes in so he gets a fresh cup. That's important. Also, I warm the cup for my special customers because it's the first cup that they look forward to. Most people don't understand what we do. Waitressing is a dying art.

We learn the history of waitressing, the economic realities of the job, the difference between older and younger waitresses, and about the people who frequent diners. I spent a long time on each page, digesting the words and looking at the photographs. It is an historical study, a sociological study, and a study of America, past and present. These waitresses are aging and younger women are not taking their places. The 'regulars,' the mostly older men who come in, will not be replaced by younger men.

Although there will always be women who will wait on tables their entire lives, will there always be lifers who love their jobs? Faye Blackwell of Washington, D.C., doesn't think so. "I think waitressing is simply going to be a means for girls to earn money to get through school or some crisis. I don't think society is geared toward this anymore. If you notice, you rarely see old servers today and a lot of that has to do with the restaurants: they want the young ones. They think that beauty attracts business and I know for a fact that it does not. People go to diners because they want to feel at home." Jodell agrees. "The younger generation will never truly appreciate waitressing," she said. "It's gone. It's just us older, war horses."

Not only will waitresses change, but the customers will be different as well. Most career waitresses say that men make up 75 to 90 percent of their clientele. Many are widowed and don't know how to cook for themselves, so they rely on the diner for their meals and come in three times a day. As this generation of men pass away, their sons will bring a new element of independence that their fathers didn't have. It's more likely that men of this younger generation will be single, either divorced or never married. In any case, they will probably know how to cook for themselves and will not go to a restaurant for every meal. As the decades pass, this new generation of customers will be very different from the typical regulars that waitresses serve today.

If you have ever waited table, or if you are a 'lifer,' or if you've ever eaten at a coffee shop, a diner, or if you never have, you ought to read this book. It is informative, fascinating, warm-hearted, and entertaining. I've never read anything like it. I hope it becomes a huge bestseller and allows these women to be appreciated for all they do in this world.
Here is a review of this book by Citizen Reader.
Posted by Nan