The Saturdays by Elizabeth Enright 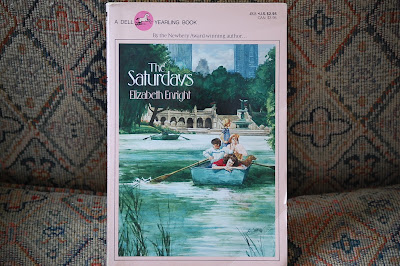 I didn't keep all the books from when my kids were little, but I knew that I would want to read the Melendy family series again someday. Ever since I was little, I have loved family stories. This may come with the territory of being an only child. I used to make up families for myself, complete with names and ages. There are four Melendy children, Mona, Rush, Miranda (Randy), and Oliver. Their ages span from thirteen to six. Their mother is dead; mentioned but never dwelt upon by the children. Their father works a lot, and mostly isn't very present in their lives. The day-to-day attention and care is given by "Cuffy," Evangeline Cuthbert-Stanley, a live-in nanny, housekeeper, cook, and "substitute mother." Another daily presence, though not so important, is Willy Sloper who takes care of the furnace, and other household jobs. They live in a wonderfully described house.

The room in which they were sitting might have been called a playroom, schoolroom or nursery by most people. But to the Melendys it was known as the Office. It was at the very top of the house so that they could make all the noise they wanted to and it had everything such a room should have: a skylight and four windows facing east and north, and a fireplace with a basket-shaped grate. The floor was covered with scarred red linoleum that didn't matter, and the yellow walls were encrusted with hundreds of indispensable objects.

The center of this story is that the children decide to pool their allowances so that one child may have an adventure each Saturday. They form a club and call it, I.S.A.A.C. - the Independent Saturday Afternoon Adventure Club. From their choices of activities, we get to know each child. And here is where this reader and mother has to suspend disbelief. Maybe in the very early 1940s a ten-year old girl would choose to spend her day looking at pictures in the art museum, and maybe a twelve-year old boy would choose to go to the opera. Maybe children were less involved with their peers, and more learned then, but my guess is that these children are not usual. Over the years, I've found many children's books to be idealized versions of child life. But that's okay; I still enjoyed their adventures. The mother-me simply couldn't believe that children of these ages (except for the youngest) were allowed to go off wherever they wanted to in New York City, alone and without telling Cuffy or their father or even a sibling where they were going. The litany offered by their father is: don't get run over, if you get lost ask a policeman for help, and don't talk to strangers.

All that said, this is a pleasant, enjoyable look at four interesting, kind, intelligent children going about their special Saturdays. They get to know some very interesting people. There are mentions of the war which is going on in Europe. There are a few 'scary' episodes which create a little fictional tension for the reader. This is the first of four books about the Melendy family, and I plan to read them all as the year goes on.

You may read a bit about the author here. She was the niece of the architect, Frank Lloyd Wright.
Posted by Nan