The Four-Story Mistake by Elizabeth Enright 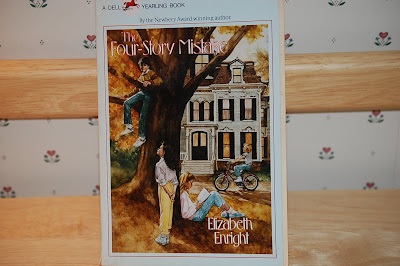 This is the second installment in the story of the Melendy family. The title of the book doesn't refer to their mistake, but rather the name their new house is known as. The original owners hired people to build a four-story house while they went to Europe for two years, and when they returned the house was only three stories (what happens when one doesn't pay attention to the builders). The family's money was greatly depleted and they could only afford to add on a cupola.

The book opens as the four Melendy children are leaving their much beloved home in New York City for a new house in the country. Randy, short for Miranda, is having a particularly hard time. She walks through the house saying goodbye to the old familiar nooks and crannies.

In the long window the scarred shade hung crookedly as it always had; for hundreds and hundreds of nights its gentle flapping had been the last sound she heard before she slept.

She could feel the emptiness of every room like an ache in her bones.

Though I am a grown-up person now, I was swept back through time as I read of her despair. There were a couple times growing up that we drove around looking at other houses, and I had a knot in my stomach fearing I would have to leave my home.

But the children do settle in, even Randy. They have a happy life here, exploring woods and streams and the house itself. They find two secret rooms, and learn about one of the daughters of the original owner. Old friends visit, and they make new ones in the small town. The Four-Story Mistake is what would be called a 'nice book.' Nothing terrible happens. The father is full of love and kindness towards his children, and Cuffy and Willy from The Saturdays move right along with the family. If you love descriptions of interiors, as I do, this book is full of details. They are so well written by the author that I almost felt like I was seeing photographs.

There's a particularly wonderful chapter about the cupola. Mr. Melendy explains how it offers 'a view apiece' to the children.

I believe that each of these windows belongs to one of you in a particular way. This one, the north one, for instance, that looks so far up the valley. It must belong to Oliver because he's always looking ahead: always straining toward tomorrow. The east one is Rush's. The view from it is all moving and changeable: the wind stirs the trees, the water dashes and foams in the brook. And the south one. See how the dark spruce branches beyond the glass make a sort of mirror of the window. That's Mona's: she's at an age where she loves her own reflection. The west window belongs to you, Randy. From it you can look back all day along the road you traveled yesterday.

But sometimes it would be nice if you and Oliver changed windows. In fact, it would be a good thing if all of you exchanged views once in a while.

The United States has entered into the Second World War, and though no one they know is fighting, the children are aware of what is going on. They work hard for the war effort, each in their own ways.

This is really a book about the differences and similarities between children, and how they should be accepted and celebrated. What a great message for readers of all ages. I loved The Four-Story Mistake.
Posted by Nan