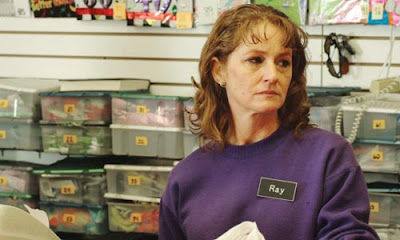 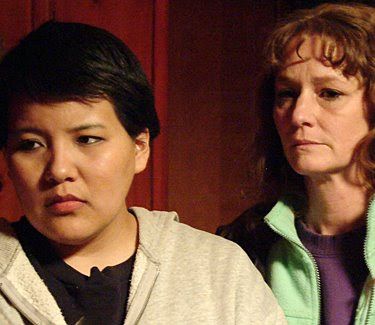 Frozen River is about mothers and children. It is about what mothers will do for their children. It is about women without husbands, or with husbands who have problems. These women are all around us. They are invisible to society at large. They barely scrape by. And these are the lucky ones. Other women are in shelters or living week-to-week in former motel units or on the streets. They are not glamorous. They are not beautiful. They live in jeans and sweatshirts and old coats. The star is Melissa Leo, who I think is the best actress working today. Tom and I first 'met' her as Detective Howard, a cop on Homicide. She has the most amazing face - it is sculptured and beautiful and yet at the same time is the face of the woman you meet in the aisle of the supermarket.

The father has just left. We learn that he is an addict who gambles away the money that should go toward a new double-wide home. The mother, Ray, played by Melissa Leo is working behind the "Yankee Dollar" store counter. She's been there for two years waiting for a promotion to working full-time. Her young male boss is condescending and you know that he doesn't even see her. His eyes are on the blonde who also works there. You know that if anyone gets that full-time job, it will be her, not Ray.

Ray has two sons, fifteen and five. She feeds them popcorn and Tang until the next paycheck comes. The rent-to-own people are going to take back the tv. The double-wide people won't deliver the home because she doesn't have the money.

I know this sounds bleak, but it is real. This is the woman who lives across town. If you are a teacher, you know her kids.

And there is more. We meet people from the Mohawk tribe who live on the 'res.' Some of them are engaged in smuggling 'illegals' into the country via the reservation which straddles the New York/Quebec border. There is a young woman, Lila, played wonderfully by Misty Upham, whose husband drowned while engaged in this work. Her mother-in-law took the baby from the hospital when Lila gave birth and is raising the child. Lila can't take regular jobs because her vision is poor, and she is too poor to buy glasses.

You know what's going to happen here. I'm not giving anything away when I tell you that the two women, the two mothers become a smuggling team. There is danger and trouble, but none of the awful things you might expect from a 'thriller' movie happen. The ending is both uplifting and realistic.

Frozen River was filmed in Plattsburg, New York. The setting is perfect for the movie, and it is almost another character. But it could have taken place here or where you live. These women are among us. I am so thankful Courtney Hunt made this important, excellent movie.
Posted by Nan