Messenger of Truth by Jacqueline Winspear 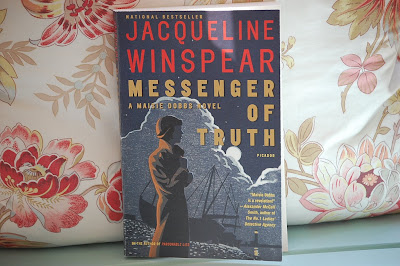 
I've been acquainted with Maisie Dobbs for a number of years now. From my reading journal, December 2004:

This was a truly excellent book, literary in the best sense. Well written, fully developed characters, and accessible to the reader. I learned so much about the 1914-1918 war; those years just preceding the war; and 1929. Maisie is a great character. She has very humble beginnings, but is taken under the wing of an upper class woman and her friend and given an education. She walks the line between classes as we see that very line beginning to disappear.

In this wonderful series by Jacqueline Winspear, we travel with Maisie on her life journey, watching society and the world changing, just as she herself does. The nameplate on her London office reads "Psychologist and Investigator" - an interesting and very effective combination of talents. Not only does she find out whodunnit, but also, and most importantly, why. The constant in the books is the shadow of The Great War, in which Maisie was a nurse. The man she loved was injured as they stood together on a battlefield. He has been in a nursing home all the years since, alive but unaware of the people and places around him. Everyone Maisie is in contact with has been affected by the war, from her great friend Priscilla whose three brothers were all killed, to her assistant Billy Beale, to the people in the cases she takes on. The books all feature a view of the war from a different, and deeply personal angle. In Messenger of Truth, there is a shocking story told through a work of art, and the price the artist pays for his portrayal.

Maisie Dobbs has been hired by an upper class woman to look into the death of her twin brother, an artist who supposedly fell from scaffolding while preparing to hang a very large painting. The woman doesn't believe his death was accidental. In the course of the investigation, Maisie meets a vibrant, artistic family; she visits the windswept beaches of Kent; she sees Oswald Mosley at a party. In this book, as in all the others, the characters are well drawn, and the backdrop against which they live their lives is fully described so that we know what is going on politically, economically, and socially. Maisie takes her time to really study a case. We are privy to her thoughts and feelings as she approaches various situations. She has a bit of a sixth sense when it comes to physical sensations, and can actually impart warmth and security to one in need of such strength. The author gives us domestic details that tell readers how a room is set up, how the inhabitant might live in that room, and what it might tell us about the person.

As neat as a pin, the room had been thoughtfully decorated, though Nick had clearly retained the more attractive elements of railway carriage design. The rich wooden bulkhead walls at either end had been stripped, varnished and polished to a shine, as had the floorboards underneath. Side walls had been painted in a pale cream distemper, and there were dark linen blinds against windows that faced the sea. Two leather armchairs, the sort one might find in a gentleman's club, were positioned close to a wood-burning stove set against the bulkhead to the right of the front door.

A wood-framed bed was set lengthways against the other bulkhead, the rich burgundy counterpane hanging low over the sides to mingle with a Persian carpet woven of what seemed to be every shade of red wool, from claret to vermillion, from maroon to a color that was almost burnt umber. ... Maisie thought the compact room seemed to exude warmth, something she thought was probably essential to life on this part of the coast, whatever the season.

This continues everywhere Maisie goes. We really see the landscape, the interior space, the clothing, and we feel the air and the sun.

If you go to Jacqueline Winspear's website, you may hear a four-minute piece in which the author talks about the life and times of Maisie Dobbs. In it she says: "It never ends when it ends." The effects of the Great War (and all wars) continue on and on.
Posted by Nan