The Cruellest Month by Hazel Holt 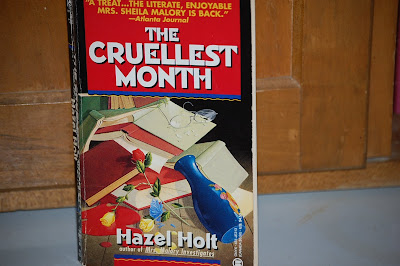 We may thank Mr. Eliot for the phrase, the cruel(l)est month. From The Waste Land:


April is the cruelest month, breeding

Lilacs out of the dead land, mixing

Hazel Holt's The Cruellest Month takes place in the month of April in Oxford, England. Mrs. Malory is doing some research at the Bodleian Library for a paper called "The Home-Front Novel: English Women Writers in the Second World War" (wouldn't you love to read it!), and her "roots" are stirred. She says:

If I am honest, I must admit that my time at Oxford was the most purely happy of my whole life. That is not to say that I haven't had a marvelous life since - a happy marriage, a son, a sort of minor but satisfactory literary career - but there is something about the days of one's youth, when the world still had the dew upon it and anything seemed possible.

It may be better to let the past alone and go on with our lives, because upon closer examination all may not have been as it seemed. Indeed, "memory and desire" can stir up emotions that are better left undisturbed. However, there she is, at the place where she was so "purely happy" and of course the memories stream back. She recalls her first love to whom she was drawn because of his "resemblance to Peter Wimsey." She becomes reacquainted with a professor she knew in those days. The flood of memories accompanies a modern day death which has just occurred in the library. A ladder slipped, and shelving fell upon a woman, killing her. She was found by Mrs. Malory's godson. He feels that perhaps it was not an accident, and the sleuthing begins!

In a world where so many films and books feature young characters, it is a treat to read the stories about Mrs. Malory. She is in her fifties as the series begins, recently widowed, with a son at Oxford University. She is a role model for women in this life situation. She is sad, but she dwells on her happy memories. There are a lot of nonfiction books about widowhood, but I feel that sometimes a fictional character can help a reader as much as a real-life guide. Just being in her presence offers a great deal of comfort. I love these books and look forward to reading them all. For book reports on two other Mrs. Malory books, you may go here, and here.
Posted by Nan