The Apothecary by Maile Meloy 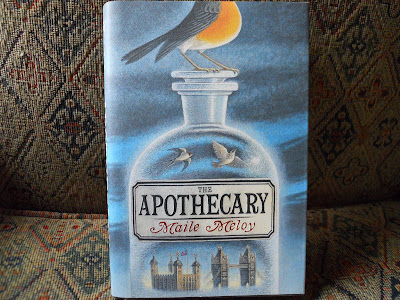 
It is rare that I read a book which takes me back to the days of childhood when I was completely absorbed in a story. The Apothecary gave me that very feeling.

The book begins in Hollywood, California in 1952. Fourteen year old Janie is walking home from school when she realizes that she is being followed by two men in a dark car. After she tells her parents who are televison show writers,


We walked that night to Musso and Frank's, which was my favorite restaurant, but it didn't feel like a treat. My parents tried to pretend everything was fine, but we took back alleys, and they watched the corners at every street. …
"So who are those men in the car?" I asked.
My mother sighed. "They're U.S. marshals," she said. "From Washington. The government."
That didn't make any sense. "What do they want?"

Addendum March 17: This restaurant was just mentioned on Roberta's blog! It is still going and has a website.

After telling their daughter that they are going to move to London, Janie asks, 'What did you do?' Her father says, 'nothing,' and goes on to tell her about a childhood acquaintance.


"I don't know if you remember Katie Lardner."
"The Lardners moved to Mexico, because her father became a target. It became impossible for him to work here."

Here Maile Meloy is including a real person. Ring Lardner, Jr. went to jail, and then moved to Mexico, and later England where he worked on The Adventures of Robin Hood, just as Janie's parents do.
You may learn more about this period in Hollywood here. 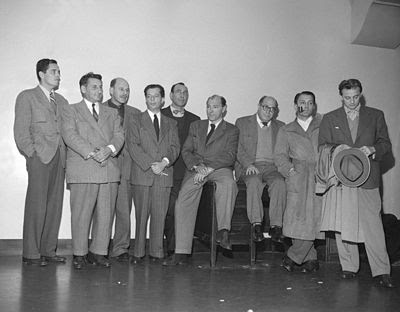 Lardner is on the far right.


Janie says that they moved because her father was a Communist, and then she asks her parents if they are. Mr. Scott answers:


"We believe in the Constitution, Janie," he said. "And we've been put on a list of people they're watching. That's why they're watching you, when it has nothing to do with you. And I will not have them following my child."


"We've heard they'll confiscate passports soon so people can't leave the country. So we have to go right away."

They have a job lined up in London working on a television show about Robin Hood.

And thus, Janie's life changes completely. She hates to leave her sunny home, her friends, her life. When they land in England, they find much the same situation as readers of the book 84, Charing Cross Road learned about. 1952 London is light years away from the United States. They move into a small apartment with a broken gas water heater in a kitchen 'no bigger than a closet.' The landlady was 'not going to let some spoiled Americans fail to appreciate their good fortune.'


"You're lucky to get this place you know. … People are queuing up for a flat like this, with its own lavatory, and separate bedrooms, and a working telephone line."

There are ration cards, and many foods, such as eggs are hard to come by. Chocolate bars have been scarce 'since the war.' And the streets are still 'bomb-scarred and desolate, seven years after the war's end.'

When they go to the neighborhood apothecary for hot water bottles, the first unusual occurence happens. Her father jokes about needing something to cure Janie's homesickness, and the apothecary takes two jars from the shelf and measures the ingredients, aspen and honeysuckle, into a small container. He tells Mr. Scott to add some water, and that they will not hurt her. He says they might help or they might not, because people have 'different constitutions.'
Note: apothecary is both the name of what we would now call a pharmacy, and the pharmacist.

At her new school, she meets four people who become important in her life: her Latin teacher, Mr. Denby, a war hero who was a prisoner of war in Germany for two years; a wealthy, beautiful girl, Sarah Pennington who thinks Mr. Denby is 'dreamy;' a boy, Sergei Shiskin, whose father works for the Soviet embassy; and most importantly, Benjamin Burrows, whose father happens to be the apothecary.

The adventures begin almost immediately when she and Benjamin go to the park and see Sergei's father apparently passing secret messages, and are shocked to see Benjamin's father picking up one of them. When the apothecary tears it up, they recover it from the trash. 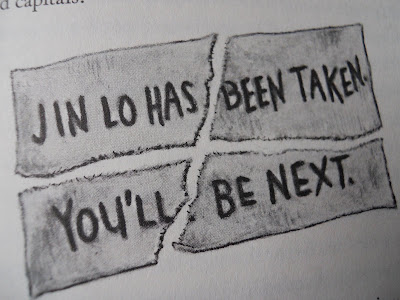 Well, can you imagine how afraid, and yet excited, you would be in this situation if you were Janie's age?

And there I shall stop. I've set up the story, and from this point it becomes absolutely thrilling. Murder, herbal potions (to enable one to fly, and become invisible!), really bad guys, the atomic bomb - all these become part of the perils and excitements that Janie and Benjamin experience. Their sleuthing takes them to the Chelsea Physic Garden. I was happy to see a couple videos at the site, and a virtual tour which really brings The Apothecary to life.

The book contains one of my favorite devices. A 'note to the reader' written by Janie, now Jane, in 2011 sets up the tale. She talks about her memories of that year.


People describe their childhoods as magical, but mine - it really was.

As is this whole book. Magical and believable at the same time. A truly wonderful reading experience which is enhanced by the illustrations by Ian Schoenherr. 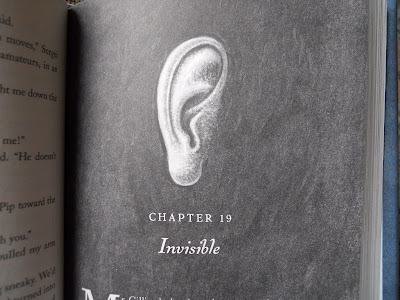 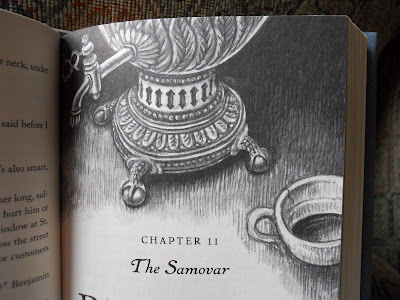 And, if my book report hasn't convinced you to read The Apothecary, surely this will!